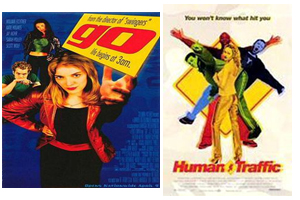 Use of Ecstasy in ‘Go’ and ‘Human Traffic’

News headlines are often punctuated by a variety of drug seizures, hauls and court cases where drug use is sometimes implicated. Ecstasy is one of the drugs that get these non-honourable mentions.

Ecstasy or 3,4-methylenedioxymethamphetamine (MDMA) is also known by the street names Molly, Mandy or XTC. The drug ecstasy dates back to 1912, when it was first synthesized. Although initially used by psychotherapists and psychiatrists, its recreational use also flourished. Ecstasy is one of the drugs of choice in music festivals and raves where there is clubbing, dancing with loud music and flashing colorful lights.

In ‘Go’ (1999) we are introduced to a group of friends working at a supermarket. A girl called Ronna Martin agrees to take her colleague’s shift since she needs money to pay her rent and not get evicted. Whilst at the supermarket, she is approached by two guys who claim they are looking for something more euphoric than doughnuts for a big rave party. Ronna subsequently decides to approach the drug dealer her colleague knew. This leads to a series of dodgy and ludicrous circumstances. After realizing she would get caught, Ronna Martin even flushes down the toilet the ecstasy pills she tried so hard to get, leaving her with the problem that she had temporarily left her friend with the drug dealer as collateral. We see a random flash dance of the Macarena. Deceit and stupidity prevail. Ronna stoops to selling allergy medicine and chewable aspirin which she tells people are ecstasy. This instance shows, not the use of adulterants, but offering a different product altogether. We also see euphoria, disinhibition and vomiting of their male friend who took ecstasy. In this movie the stupidity and irrationality of those involved in drug dealings is shown time after time – such as nonchalantly tossing away a gun with fingerprints on it.

In ‘Human Traffic’ (1999) we are initially introduced to one of the protagonists who is calling himself ‘the prince of paranoia’. Drugs are used here as a form of escapism. In a class they are told about some of the possible adverse effects of ecstasy such as propensity for depression in later life, overheating, increased heart rate, palpitations and erectile dysfunction. Concurrently, one of the main characters brings forward different arguments such as increased feelings of empathy and other more favorable points of view. Other characters claim the reason they come to the rave parties is ‘to get absolutely trashed’. The movie touches upon themes such as universal togetherness, the quest for happiness and increased sociability. We also see an episode of agitation and paranoia. At one point we see a character ask how one defines sanity. At the end of the partying they are seen to be avoiding eye contact. It is said in the movie, that at that point, these children of ecstasy are now waiting to be driven out from those now unfamiliar surroundings. The movie depicts episodes of mental confusion, hallucinations, cognitive impairment, restlessness, difficulty sleeping, sexual dysfunction as well as enhanced sexuality. There are a lot of references to paranoia, with for example the comment ‘surfing the waves of social paranoia’, and the protagonist later stating he is sexually paranoid. Parents and grandparents talk about neglected children who are undisciplined and turn to drugs as a form of escapism. Whilst sitting at this dining table with his family, the protagonist experiences an altered perception of time with a sense of rewinding words. In addition to ecstasy, other drugs make an appearance.

In both movies, the use of ecstasy is associated strongly with the rave party scene. Ecstasy is a euphoric stimulant and some report greater appreciation of the surrounding music whilst on ecstasy. Other effects include hyperthermia, increased sweating, dehydration, bruxism and hyponatremia. After-effects include depression, wakefulness and disorganized thoughts. Other themes surrounding drug culture which are portrayed here include alienation, lack of fulfillment at work and unemployment. Harm reduction is key.