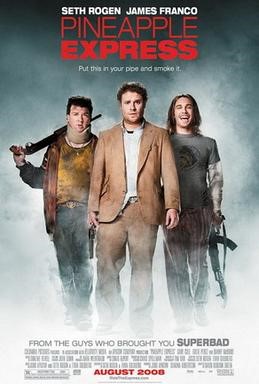 Cannabis is a very popular drug. In the recent past we have seen the legalization of medical cannabis in Malta. Marijuana use is well known to have sparked numerous debates. Tetrahydrocannabinol or THC is the principle psychoactive compound found in the plant. Cannabidiol or CBD is the non-addictive component which does not get the user high. However, in addition to these chemicals multiple other cannabinoids are also found.

The movie ‘Pineapple Express’ starts out in 1937 with a military officer asking a test subject how he feels about smoking the, so-called, ‘item nine’. The subject shows stupid, rude and inappropriate speech but seems to be having a good time. ‘This is great! This is the bees knees, item nine’. They subsequently reach the conclusion ‘item nine’ is illegal.

The scene later shifts forwards to many years later, where a man named Dale Denton is working as a process server. Whilst driving his car he muses on the issue of smoking weed which, he believes, makes everything feel better. Dale is dating a younger girl, Angie, who is still in high school. He also pays a visit to Saul, his drug dealer. Saul tells him he received a shipment of the ‘dopest dope I ever smoked’, called ‘Pineapple Express’, a rare strain of weed.  They then smoke a cross-joint where they light all three ends.

Dale ends up telling his hippie drug dealer that for a living he serves legal documents to people who do not want them. Later he inadvertently witnesses a murder whilst smoking weed and panics whilst under the influence. He ends up leaving the joint behind at the scene, which was soon identified as ‘Pineapple Express’. He rushes to his drug dealer friend Saul’s place where he ends up throwing up on his printer. During their conversation Dale comes to realize from Saul how rare that particular strain was and that he was the only guy who bought it in town. This leads to the realization that they may now be hunted down as witnesses of the murder, so they then become fugitives on the run.

During their multiple misadventures they end up in the woods, wake up after having slept for 18 hours and they sell weed to school kids to get money to buy bus tickets. An officer, who saw three students walking past with ‘eyes as red as the devil’s dick’, apprehends Dale Denton. Although he did not have a low body mass index, he tries to explain himself claiming it helps his anorexia. Car chases and gunshots ensue. The events of the movie take a downward spiral to wanton violence, with relatives and acquaintances such as his girlfriend’s family also being paid most unwelcome visits.

When his girlfriend reprimands him about his addiction getting them into trouble, ludicrous conversations ensue where they break up, then he phones her to get back together, she then mentions the word marriage and they instantly break up again.

At one point Dale and Saul are speaking to one another and there is finally the realization that they were not fully functional when they were high. When the place where the marijuana plants were grown is seen by the hippie drug dealer Saul, he initially exclaims ‘El Dorado’ and that ‘the legends are true’, stating ‘it’s the most beautiful thing I’ve ever seen’. When the building is later burnt down, the marijuana also burns.

The movie illustrates drug gang violence, corruption and crime, marijuana farming as well as the naming of different strains or marijuana. It constitutes a funny portrayal of people being recreationally high and making poor judgments. It illustrates reduced inhibitions and potential problems of driving on marijuana. Cannabis was originally thought of as a gateway drug and stigmatized. Cannabis psychosis is well documented. A dilemma stemmed from the fact people have both claimed cannabis ruined their or their relatives’ lives, as well as others claiming that it saved their lives. Constituents of the plant can be carefully extracted and directed for treatment. Medical marijuana is now considered a medicine. Medical cannabis has been gaining momentum in some cases where certain medical conditions are refractory to other treatments. Areas where medical cannabis has been used include pain relief, epilepsy and PTSD amongst others.