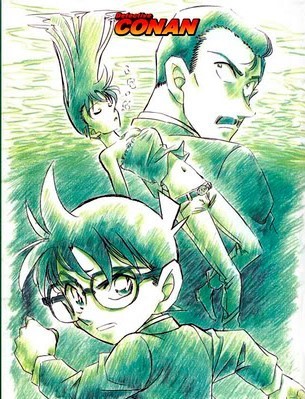 Some Biochemistry Intermingled in a Murder Series: ‘Detective Conan’

Sometimes one encounters a series where, although most episodes are not related to biochemistry per se, there is an overarching unifying plot line that indeed feeds upon a basic principle in pathology. A recurrent theme in the manga, animated series and the live-action adaptations of ‘Detective Conan’ is APTX (Apoptoxin) 4869, which is an entirely fictitious prototype drug which is said to activate cellular apoptosis, as well as also sometimes activating telomerase. This was developed by Shiho Miyano, a biochemistry genius, and its very existence and side effect is a main driving force of the series.  Although the drug is fabricated for the intents of the science fiction element of the series, the suggested mechanisms and processes it is said to activate such as apoptosis and telomerase are of great interest to a medical and scientific audience.

‘Detective Conan/Meitantei Conan’ by Gosho Aoyama, or as it is known in the English language release ‘Case Closed’, follows the story of a young detective who’s life changes completely after encountering a group of criminals called ‘The Black Organisation’ who administer APTX 4869 to him in an attempt to silence him forever. However, in an unexpected turn of events, he reverts to a younger version of his own self instead. The events depicted in this animated series are purely science fiction, but the basic medical and scientific principles on which this drug was said to work, namely activation of apoptosis and also the potential for telomerase activation, are indeed real separate scientific concepts.

Apoptosis refers to the process of programmed cell death. Unlike necrosis, apoptosis is a regulated process. Mechanisms for initiation of apoptosis include the tumour necrosis factor (TNF) pathway as well as the first apoptosis signal (Fas) pathway. Numerous elements and signaling molecules are involved in the biochemical signal transduction pathway of apoptosis. (1-7) At the end of a chromosome there are repetitive nucleotides regions called telomeres.  Telomerase is the key enzyme for extending these regions, it is implicated to play a definitive role in aging, neoplasia and cell immortality research amongst others. (8-13)

The fictitious drug APTX 4869 was originally to be used as a drug that would kill the target, and evade toxicological detection since it would not leave reliably detected traces, however it turned out to have a rare side effect of de-aging. The character of Shiho Miyano, who is also referred to as Sherry, and later as Ai Haibara, is a very interesting personality indeed and a great addition to the plot line. Not only is she portrayed as a leading expert in biochemistry, but also briefly in some instances throughout the series, she is seen to have other medical knowledge as well. Her struggle and desire to escape the Black Organisation, her knowledge and occasionally witty comebacks make her a very relatable character to people with an interest in laboratory medicine and science.

This review is partially funded through the Endeavour Scholarship Scheme