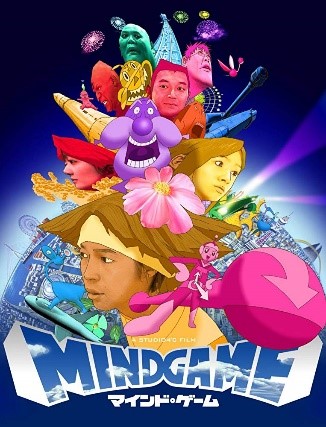 This movie in itself provides somewhat psychedelic visuals. However initially one may be put off by brief glimpses of the art style given it provides a very different unorthodox visual design to most other animated works. The surreal style and trippy transcendent narrative and visuals hold distinct similarities to certain effects described for the drug lysergic acid diethylamide (LSD). The visuals have glowing changing colours with distortions and mind bending animation. Ideas can take shapes and forms with raw motions and colours. The awkward audacious imagery with strange, disturbing appearances of people and surroundings act in concert to amplify the conscious and unconscious forces of the mind.

The story itself is about the main character Nishi who has been longstandingly infatuated with his previous school mate Myon. However Myon is going to marry another man Ryo. The main event of the story unfolds at Myon’s sister’s yakitori restaurant where violent gun-wielding Japanese mafia enter followed by Nishi’s near-death experience. Following this, a bizarre set of events are set in motion. After escaping from gangster gunfire and ending up engulfed by a whale they end up living surreal moments with an old man they meet and then try to escape back into regular society. The story telling is abstract and so is the ending.

The line between perception and imagination is often blurred, expanding and amplifying their consciousness. His real or psychological death puts Nishi in a panic that his existence is over, delving into the psyche and experiencing the divine. After his temporary death experience he meets a god whose image is in constant flux. There are moments of escalating fear and later a different energy starts flowing through him after experiencing the outer edge of consciousness through a near-death experience and coming back. There are apparent anomalies in the sense of time with an instance of rewinding time.

The frenzied style with unorthodox texture and colours, animated memories and emotions, as well as shape-shifting images at times project dissociation and interconnectedness. Whilst trapped in the whale Nishi makes love to Myon, portrayed as a blending and melding morphing burst of colours. The characters are transformed into blending colours of paint. There is dissolving of a sense of self, expanding realms of perception and embracing of interconnectedness. The interconnected interphases of mind and body, overlaying patterns, energy exchange and search for meaningful experiences are portrayed. The compelling abstract visuals can provide both a sense of movement and at times of static. Conjured memories with trails and afterimages are used as plot devices. Images at times tend towards cycles of shattering and reconstruction or morphing. The whole situations seem so bizarre,  at times almost bordering on apparent lapses of insanity. The art style gives a new sense of spatial dimension.

The old man they meet in the whale, when telling his backstory, references a deal he was involved in which drug control knew about, prior to being engulfed by the whale. This reinforces the theme of this strange ambiance, kaleidoscope of colours, possible eidetic imagery and synaesthesia with visuals so reminiscent of the effects documented for Hoffman’s substance, LSD.

The mind-altering visuals bring a new world view of some uncharted areas of their mind and altered states, touching on spirituality when coming in close contact with death and enhancing elemental senses and basic awareness.

The movie at times feels less about the actual plot itself than it is about the mind games. Here the mind games and manifestations are many and it has to it the feel of apparent altered states and stimulation of serotonin receptors, reminiscent of what would be described as ‘tripping’.

From Yambuku tothe US, Italy, Switzerland and…

The Art of Campari