Detection of Subtle Breast Cancers with Mammography: The importance of using the correct technology and technique

Mammography is an excellent tool for the detection of breast cancer. Screening mammography has been repeatedly shown to reduce breast cancer mortality by up to 40%.1 It is also associated with earlier stage diagnoses that require less extensive treatment.

However, screening mammography is not without its caveats. Ten to 30% of cancers can be missed if subtle findings are not detected. Breast cancer must be detected before it causes clinical symptoms, otherwise more treatment is required, and prognosis may be worse.

The main factors contributing to missed cancers on mammography include:2

The ways to avoid missing cancers include the following:

There are different types of technology used to obtain mammograms; these reflect mostly different stages of technological development. The type of technology available varies from one imaging department to another. Computed Radiography (CR) mammography has been available for around 25 years and is still used in many institutions today. On the other hand, Direct Digital (DR) mammography delivers superior image quality resulting in significantly improved diagnostic accuracy. DR mammography is considered the gold standard for breast cancer screening.

The last 8–10 years have witnessed a further development in DR mammography, whereby the standard 2D technique was combined with the principle of X-ray Tomography to create 3D mammograms. This technique is known as Digital Breast Tomosynthesis (DBT). Its main advantage is that it addresses the problem of tissue overlap, which is often encountered in dense breasts. It is an excellent tool for analysing equivocal findings particularly in denser areas of the breast. The latest research studies suggest that this will eventually replace 2D mammography as a primary breast cancer screening test.

While CR mammography is still widely available, this method should be avoided for breast cancer screening in favour of DR mammography or DBT, since these modalities are more accurate.

Given the considerable improvements in image quality attained with both DR and DBT technologies, the remaining factors that influence mammography accuracy are mostly examiner-related. These may be related to radiographer technique (patient positioning, avoiding motion artefact and adequate compression) or radiologist analysis and interpretation methods (ensuring all areas of the mammogram are included and analysed, confirming that technique is adequate to allow accurate analysis, and detailed comparison of current with prior mammograms).

Incorrect positioning may limit the image diagnostic value of a mammogram.3 To cover all parts of the breast on mammogram, an up-and-out positioning technique is used; the breast must be drawn out to include the chest wall muscles and up to include the inferior axillary fold. The difference in distance between the nipple and chest wall muscles on mediolateral oblique (MLO) and cranio-caudal (CC) view must be less than <1cm. Figure 1 shows a near-chest-wall cancer located in the inferior breast fold that is poorly seen in image a. due to incomplete inclusion of posterior tissues but is evident in images b. and c. taken with correct up-and-out positioning.

The nipple must be displayed in profile otherwise cancers located just beneath the nipple may be obscured. Figure 2 shows a cancer located deep to the right nipple that is only evident when the nipple is positioned on profile. Further imaging of the nipple area with breast ultrasound or MRI may be required in equivocal cases, however if the nipple is incorrectly positioned on the mammogram, one may not be alerted to that need.

The retroglandular and inferior and medial triangle should only contain fat or muscle. Any density in these areas, especially if new, should be deemed suspicious. Figure 3 shows a subtle cancer in the inferior fold, which may have been overlooked if the inferior fold had not been completely imaged.

There must be adequate inclusion of lateral and posterior portions of the breast on CC view. Note the differences between image a and b in Figure 4; a nipple marker identifies the location of the nipple (arrowhead) and the line drawn outside the margin of the breast shows the difference in the amount of lateral breast tissue included in each image. The small cancer located in the posterior fat on image b. is not seen on image a. because of incorrect positioning.

Use of a standard search pattern by the radiologist may avoid missing lesions in areas that are often overlooked:

Careful review of the axillae for new lymph nodes or increased lymph node size is particularly important in patients with a prior history of excised breast cancer (Figure 8). In addition, it is crucial to compare current with prior images that are at least two years old as slow growing cancers may appear unchanged in the short term. Finally, one must give importance to the clinical findings; any clinically suspicious finding that finds no mammographic correlation should be imaged further with ancillary modalities such as DBT, ultrasound and MRI and, if still in doubt, with percutaneous biopsy.

In summary, the steps that must be considered by any mammography service wanting to improve its diagnostic accuracy are as follows: 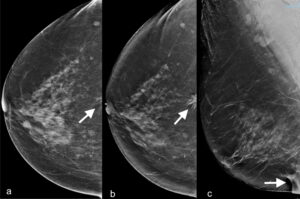 Figure 1. a. CC view showing a near-chest-wall subtle asymmetry (arrow). b. CC view one year later showing an obvious spiculated lesion at same location (arrow). c. Ultrasound confirmed the lesion to be located at 0600; this is not seen due to incomplete depiction of the inframammary fold (arrow). 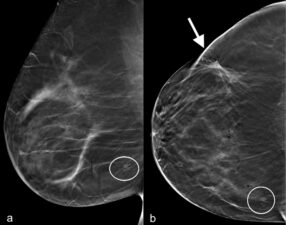 Figure 3. a. Right MLO and b. Right CC images from DBT stack performed on a patient who had a cancer nodule excised (arrow) followed by radiotherapy; both images show a subtle near-chest-wall lower inner quadrant invasive mucinous cancer (circle). 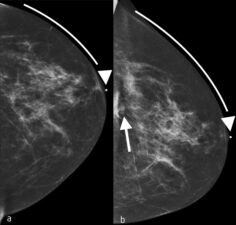 Figure 4. a. Left CC view taken a year earlier with nipple pointing laterally (nipple marker – arrowhead) and incomplete inclusion of the lateral breast (line). b. Recent left CC view with nipple in correct central position (nipple marker – arrowhead) that includes the lateral breast tissues (line) and shows a small lesion (arrow) that on biopsy was confirmed to be an invasive ductal cancer. 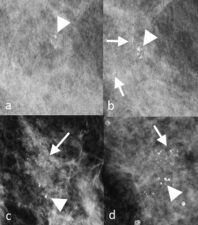 Figure 5 a. and b. are two mammograms taken one year apart. a. the initial mammogram, shows scanty coarse calcifications (arrowhead), which in b. appear more coarse and therefore more likely benign. In retrospect, b. shows additional calcifications (arrows). However, there is motion artefact in both mammograms a. and b. Patient motion or respiratory motion can both cause blurring particularly on spot compression/magnification views like a. and b., since longer exposure times are needed. c. and d. were taken a further year later with adequate compression to prevent motion; both images shows clustered microcalcifications distributed in a linear fashion (arrows), a feature of DCIS (ductal carcinoma in-situ).

Figure 6 a. and b. are CC views and c. and d. MLO views of the left breast taken 1 year apart. They show a subtle developing asymmetry along the posterior fat-glandular margin (circle). Subtle changes in the contour of the fat-margins may be easily overlooked. 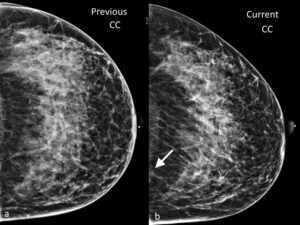 Figure 7. Previous a. and current b. CC views of the left breast show the importance of examining the edge of the mammograms. The arrow in b. indicates a new asymmetry in the posterior and medial portion of the left breast, which was later confirmed to be an invasive lobular cancer. 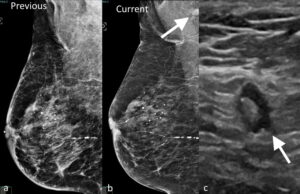 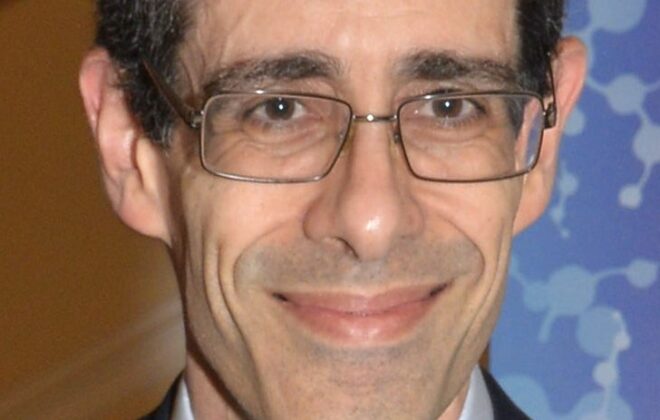