Inflammatory breast lesions have radiologic features that often mimic those of malignancy. Infective mastitis is the most common condition that may be indistinguishable clinically from carcinomatous mastitis.

The present article will present three categories of inflammatory disease of the breast: those caused by atypical infections, vascular disease and a further group in which the cause is unknown (pathogenetically unclassified). These less common forms of inflammatory breast disease constitute an even greater diagnostic dilemma and always require biopsy.

Mycobacterial, fungal, and parasitic infections, although rare, can induce an inflammatory, commonly granulomatous reaction in the breast.

Among parasitic infections, filariasis has been described as presenting with a mass containing serpiginous calcifications, schistosomiasis as calcifications with mild architectural distortion, sparganosis as a lobulated mass with irregular contours, and echinococcosis as a dense, well-circumscribed mass at mammography with a heterogeneous, complex cystic appearance at US.

Among fungal infections, actinomycosis has been described as a lobulated mass with irregular borders with skin thickening. Blastomycosis manifests as a partially circumscribed subcutaneous mass or bilateral masses with well-defined contours at mammography and a complex cystic structure on ultrasound.

Mycobacterium tuberculosis infections are a serious clinical problem in undeveloped countries. Although uncommon in Western countries due to socioeconomic and medical progress, an increase in disease prevalence was observed in the early 90’s in immune-compromised patients particularly those infected with human immunodeficiency virus.

Tuberculous mastitis is secondary in most patients, but the primary focus may remain clinically occult. The infection may reach the breast through retrograde spread from axillary, cervical or internal mammary nodes, direct extension from contiguous structures such as the chest wall or haematogenous dissemination. The latter has been observed in acquired immunodeficiency syndrome patients with miliary breast involvement. Entry through the nipple may account for some pregnancy-related infections.

Clinically, most patients present with a hard, painless lump in the breast that is indistinguishable from cancer. Up to 50% of patients have axillary node enlargement. Premenopausal women are more often affected, and there may be a predilection for women who are lactating.

The radiologic manifestations of mammary tuberculosis can be classified into three distinct patterns: nodular, diffuse, and sclerosing. The nodular pattern manifests as an ill-defined or irregular mass that closely resembles carcinoma (Figure 1). The diffuse pattern simulates inflammatory carcinoma with skin thickening (Figure 2a). The sclerosing type, which usually affects elderly women, manifests as increased breast density with areas of architectural distortion (Figure 3). Large, dense, calcified axillary nodes can be demonstrated with appropriate axillary views and are considered to be suggestive of the disease (Figure 2b). US can be useful in the evaluation of the internal cystic, solid, or complex structure of the masses and can help identify a fistula or sinus tract. Contiguous chest wall and lung involvement are best evaluated by CT imaging.

The diagnostic confirmation of mammary tuberculosis is often difficult and is usually based on inflammatory and granulomatous findings at FNA cytological analysis or biopsy. Acid-fast bacteria are usually not detected and cultures develop slowly and are not always demonstrative.

Mondor disease is a rare, usually self-limited thrombophlebitis of the subcutaneous veins of the breast. It has commonly been related to trauma, physical exertion, and surgery, and may be associated with carcinoma. About 25% of cases involve men.

Diagnosis is usually established clinically on the basis of the presence of a characteristic painful, tender, palpable cord-like structure, generally located on the lateral aspect of the breast. At mammography, the thrombosed vein may appear as a cord-like structure (Figure 4a). Rarely, the vein calcifies. At US, the vein appears as a superficial tubular structure filled with low-level internal echoes due to thrombus (Figure 4b).

Granulomatous mastitis is a very rare inflammatory disease of unknown origin. Immunologic causes have been postulated, but the absence of vasculitis or of a prominent lymphocytic component is against this hypothesis.

The diagnosis of granulomatous mastitis is based on exclusion, since it depends on the demonstration of a particular histological pattern combined with the exclusion of other granulomatous reactions presenting in this and the previous article. At pathologic analysis, granulomatous mastitis manifests as a non-caseating, non-vasculitic granulomatous inflammatory reaction centered on lobules. Fat necrosis, abscess formation, and fibrosis may occur.

Clinically, granulomatous mastitis generally manifests as a distinct, firm to hard mass that may involve any part of the breast but tends to spare the subareolar regions. An association with pregnancy or lactation has been documented, as this disease typically affects younger women, usually within 6 years of pregnancy.

The mammographic features are variable, ranging from no findings in patients with dense breasts to a mass lesion and focal asymmetric density. The US appearance of multiple clustered contiguous hypoechoic tubular lesions has been considered suggestive of the disease, although the latter feature is not always found (Figure 5).

The prognosis of this condition is good, although local recurrence has been reported. Primary treatment consists of excision biopsy. Corticosteroid therapy has also proved effective.

In summary, diagnosis of the above inflammatory conditions of the breast is complex and requires full knowledge of 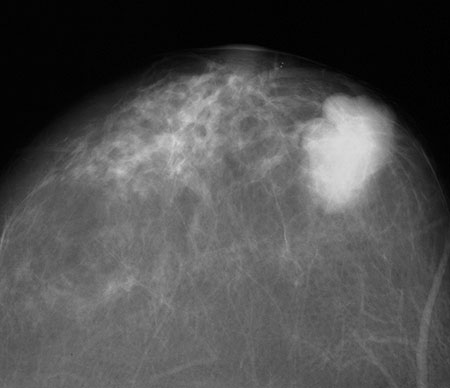 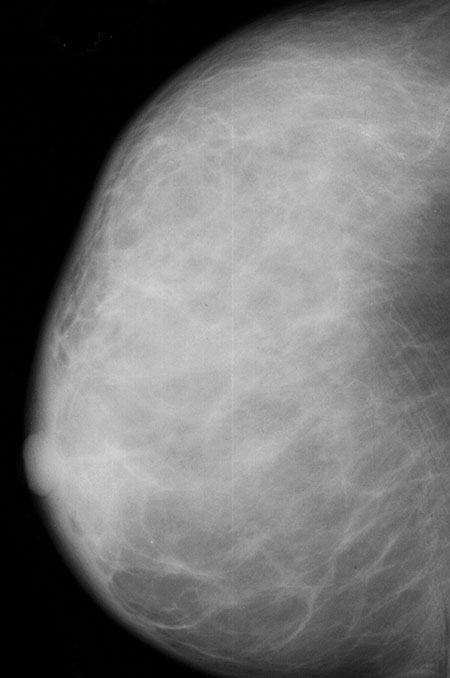 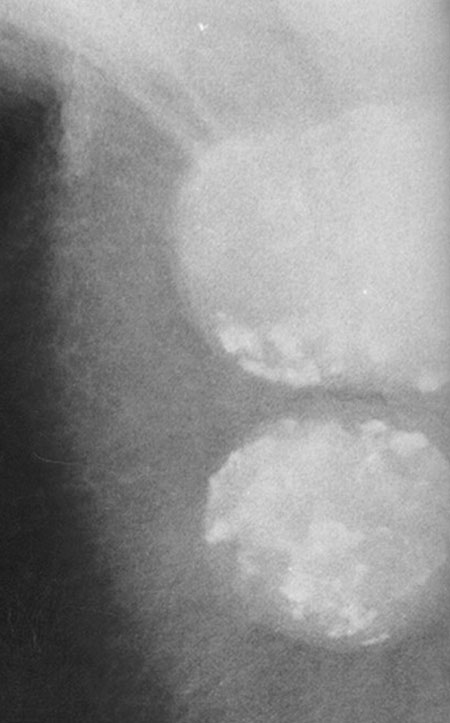 Figure 2. (a) Diffuse type breast tuberculosis present as diffuse density due to lymphatic infiltration with thickening of the Cooper ligaments. (b) Axillary calcified nodes are present. 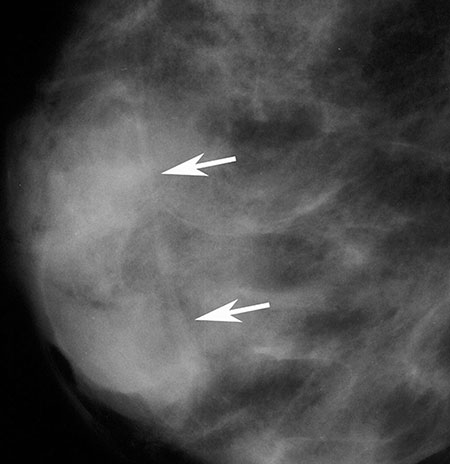 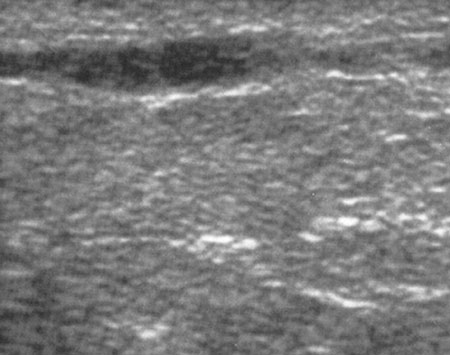 Figure 4. (a) Mondor disease presenting as a superficial linear density (arrows) on mammography with a corresponding to the cord-like area seen at clinical examination. (b) Ultrasound image reveals the thrombophlebitic vein. 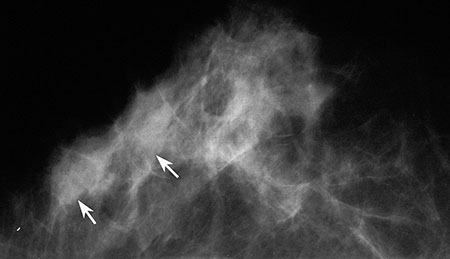 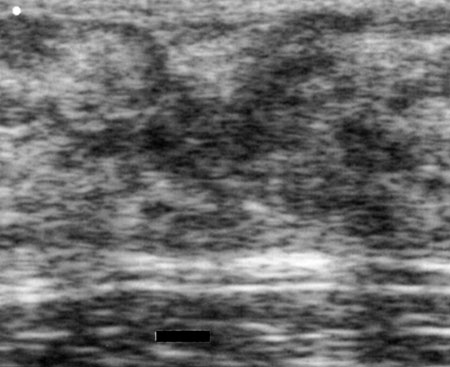 Figure 5. (a) Granulomatous mastitis 2 years after pregnancy presents with subtle asymmetric density on mammography (arrows) at the location of the palpable mass. (b) Ultrasound image reveals a heterogeneously hypoechoic tubular mass with ill-defined margins surrounded by hyperechoic boundaries.

People with dementia need more support to manage their medication

The role of sexuality in eating disorders