New approach to treating infectious diseases as an alternative to antibiotics 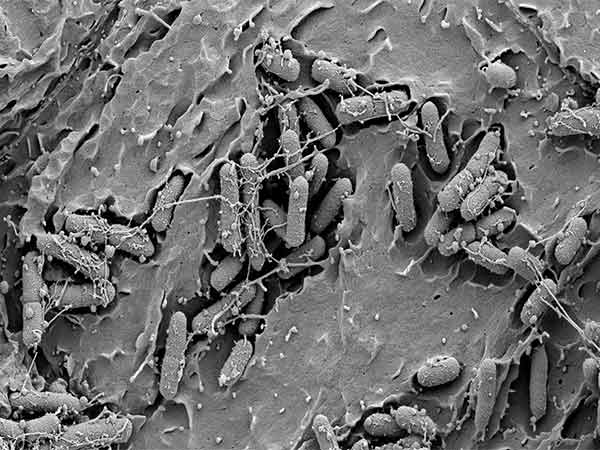 Enterotoxigenic Escherichia coli (ETEC) is known as a major cause of diarrhea in travelers and people living in developing countries. According to the World Health Organization (WHO), ETEC is responsible for 300,000 ~ 500,000 deaths a year, constituting a serious problem.

Effective vaccines for ETEC have not been developed, so patients infected with ETEC are treated with antibiotics and supporting measures. However, the emergence of multidrug-resistant bacteria has become a social issue, so the development of new treatment methods is sought after.

Adherence to the host intestinal epithelium is an essential step for ETEC infection in humans. It was thought that a filamentous structure on the surface of bacteria called ‘type IV pilus’ was important for bacterial attachment, but its detailed adhesion mechanism was not known.

One of the corresponding authors, Shota Nakamura, says, “We demonstrated that type IV pili on the surface of the bacteria were not sufficient for ETEC adherence to intestinal epithelial cells and that proteins secreted by E.coli were also necessary. The administration of antibodies against the secreted proteins inhibited attachment of the E.coli.”

Using X-ray crystallography, the researchers studied how a protein located only at the pilus-tip interacts with a protein secreted by E.coli in the intestines, clarifying the attachment mechanism of ETEC; that is, secreted proteins serve as molecular bridges that bind both type IV pili on the surface of the bacteria and intestinal epithelial cells in humans.

Nakamura also says, “It’s possible that this attachment is a common feature in many type IV pili expressing enteropathogens such as Vibrio cholerae and constitutes a new therapeutic target against such bacterial pathogens.”

Their research results will lead to the development of not only new vaccines for ETEC, but also anti-adhesion agents for preventing the binding of proteins implicated in bacterial attachment. Anti-adhesion agents can rinse pathogenic bacteria out from the body without destroying them, so there is no danger of producing drug-resistant bacteria. These agents, once developed, will act as a novel treatment approach that may serve as an alternative to antibiotics.

How Big is the Diabetes Type 2 Problem?