Marika Azzopardi speaks to Dr Gauden Galea, a public health physician who is the current director of the Division of Noncommunicable Diseases and Promoting Health through the Life Course at the WorldHealth Organization Regional Office for Europe, based in Copenhagen.

TS: You are presently living and working in Copenhagen – can you explain more about this post?

I have been employed with WHO since 1998 and this is my 4th duty station to date. I started off with two years in Fiji, then six years in Manila, then four years in Geneva and have now been in Copenhagen for five years.

TS: What was your specialisation in Malta before you left?

I specialized in public health and held two posts. The first was Head of the Health Education Unit, which is now incorporated into the Health Promotion & Disease Prevention Services. I spent six years in this post. Afterwards I became the first Executive Director of the Institute of Healthcare, now Faculty of Health Sciences. I held this post between 1992 and 1998.

TS:How did you come to relocate abroad?

The public health discipline is characteristically dependent on social, cultural, behavioural and other determinants of health and disease, all of which are often connected with international influences. Consider, for instance, migration, disease outbreaks, cultural influences such as advertising, trade and cross-border relations … it is all much larger than what happens in a single country. In Malta, I was very aware of the influences of public health on small island nations. In fact, Malta is a key leader in the study of sociology, economics, administration, and public health amongst small island nations. I began writing about the topic and presented a paper to the WHO. That basically started it all.

TS: What has been your most pleasantly surprising experience during these years?

Living in the small islands of the Pacific. I was offered the post in Suva, Fiji at the end of 1997, to manage a programme called ‘Healthy Islands’ which concerned itself with noncommunicable epidemics. It was a very different context to Malta, of course. I was pleasantly surprised to find a good level of technical competences and much of my Maltese experience in public health was directly relevant to the work I conducted there.

TS: Can you explain more?

In the mid-late 1990’s the Pacific islands started exploring health promotion. I was lucky to be given the chance to contribute to a number of initiatives. By 1998, several projects were running in parallel and I had the chance to work in Fiji, Tonga, Papua New Guinea, Nauru, Marshall Islands, Cook Islands, Samoa, Micronesia and others. I travelled to 13 of the 22 Pacific countries and territories. Epidemiological studies showed very high levels of risk and burden related to a number of noncommunicable diseases. This meant that one had to take into account health systems, trade patterns and behavioural influences, alongside genetic and demographic issues. Consider the presence of certain types of imported foods – turkey tails and mutton flaps – which are all extremely high in fats and which, over a relatively short time period, came to form part of “traditional food”. Furthermore, fishing rights are leased as a source of foreign revenue. This led to a situation, where ironically, island people primarily accessed canned fish, rather than atolls and the sea. These trends (among other influences) resulted in a high incidence of diabetes, obesity and heart disease which exerted a toll on services, well-being and life expectancy. I must say that during these years I was privileged to work with many leaders who guided the islands in the implementation of innovative programmes to combat such a situation.

TS: What about your present role in Europe?

I am Director of Noncommunicable Diseases and Promoting Health through the Lifecourse within the Regional Office of Europe at the WHO. Briefly, my division covers the fifty three Member States of Europe, ranging from Central Asia to Western Europe. Technical units under NCDs include tobacco and alcohol control, diet and physical activity, NCD management, mental health and the prevention of violence and injury. Under the life-course programme, an area that was the subject of a Ministerial Conference in Minsk, Belarus in 2015, we cover the gamut from neonatal health to healthy ageing. A fairly broad remit in a very diverse Europe.

TS: What was it like, travelling and relocating in such different surroundings?

There were definitely plenty of radical lifestyle changes, actually less dramatic than one might think. I moved with my wife, Ann, who is also a physician and our two children; with a family, adjustments are not always simple. However, it was all a very enriching experience. We researched each location, searched the best schooling at every level and with careful planning, managed it all. These are normal experiences to many of my peers who are expatriate.

TS: Let us move away from the islands for a moment and concentrate on your involvement here in Malta with the set-up of The Synapse. What are your memories on that?

It all began as a joint partnership with Dr Wilfred Galea. We were young medical doctors interested in programming and IT. The technology was very limited back then, as was the awareness of the medical community on the riches of the World Wide Web. We wanted to change that and provide available resources to medical students and professionals. Our plan was to kick off the project with a bulletin board, carrying info such as Department of Health circulars, for instance. The idea of a bulletin board was suddenly overtaken by the introduction of Internet in Malta. We found we could run our own server and the new technology proved to be a huge but rewarding learning curve for us. Wilfred built a network of contacts with colleagues and companies, whilst I tackled web development and design. The Synapse embraced new partners such as Keith Gauci and Aldo Calleja who took on the management and technical side of the project. I had to leave the partnership when I moved abroad. I am happy to see the project progressed successfully thanks to Wilfred’s able guidance. Truly, those early days in our discovery of the potential of the internet were extremely exciting for us. Since then, I have kept abreast with technology, including the exploration of new languages and recent trends towards “big data”, data visualisation, machine learning, and becoming familiar with a range of open source statistical computing software … all tools which have the potential to transform the face of public health itself. 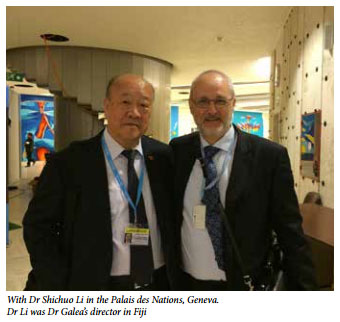 Diabetes raises risk of heart attack death by 50 per cent