Using either ultrasound (US) or computed tomographic (CT) guidance, the tumor location is identified, and a thin (usually approximately 13Gauge) RF or microwave antenna is placed directly into the tumor. A RF or microwave generator emits electromagnetic waves through the non-insulated portion of the antenna that is located within the tumor. RF and microwaves agitate water molecules in the surrounding tissue, producing friction and heat, thus inducing cellular death via coagulative necrosis.

Effectiveness of RF or microwave ablation depends on tumor size. Tumor ablation zones are spindle shaped with its long axis oriented along the shaft of the antenna (or probe) and correlate with the length of the non-insulated portion of the probe. The short axis diameter of the ablation zone of a single RF or microwave probe is approximately 1.7cm. Compared with other thermo-ablative technologies, RF and microwaves achieve consistently higher intra-tumoral temperatures, larger tumor ablation volumes and faster ablation times.

Since it is not possible to reach the periphery of the larger lesions with a centrally placed probe, multiple probes may be inserted simultaneously to obtain multiple overlapping areas of coagulation (Figures 1 and 2).

Blood flow tends to remove heat from the tissues and cooling the perivascular tissues and resulting in suboptimal tissue destruction at these sites. Both RF and microwave thermal energy may be lost through this mechanism called the “heat-sink effect”. There is in fact evidence that tumor recurrence seen following thermo-ablative therapy tends to occur in perivascular tissues.

Microwave (MW) ablation offers many of the advantages of RF ablation while possibly overcoming some of the limitations. Since MW ablation does not rely on conduction of electricity into tissue, it is not limited by charring and does not require grounding. Therefore, temperatures greater than 100°C are readily achieved, which potentially results in a larger zone of ablation, faster treatment time, and more complete tumor kill. Because the cooling effect of blood flow is most pronounced within the zone of conductive rather than active heating, a larger power field may also enhance treatment of perivascular tissue. Thus there is some evidence that microwaves tend to suffer less from “heat-sink effects” than RF.

Liver tumors are particularly suited to RF or microwave ablation. Primary liver lesions (particularly hepatocellular carcinomas) and metastases may be treated effectively with this technique (Figures 4 & 5). The number of lesions and their location would determine approach and suitability for thermo-ablation. Lung lesions (both primary and metastatic) have also been successfully treated with RF and microwave ablation (Figure 6).

Both experimental and now fairly extensive clinical work illustrates the potential clinical applications and advantages of RF and microwave ablation. The technique requires considerable experience with imaging guided lesion localisation and is time-consuming and expensive. It requires an interventional operating theatre with facilities for general anaesthesia, expensive probes and imaging equipment and a full team of specialised staff. The full potential of this technology is still under evaluation and further clinical implementation will help improve experience and contribute to both curative and palliative care of patients with cancer. 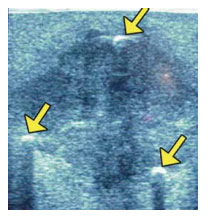 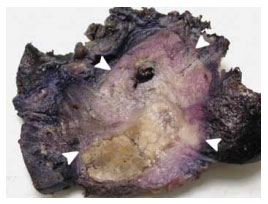 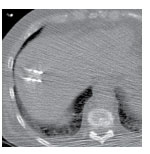 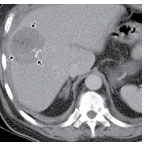 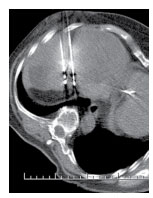 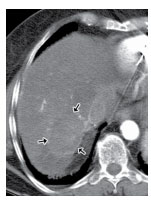 Figure 5: Microwave ablation of a hepatic metastasis in an 82-year-old woman with metastatic colon cancer to both lung and liver. She had responded well to chemotherapy and had only one hepatic lesion left, measuring approximately 4.3 cm in segment 7. (a) CT-guided Microwave ablation. (b) Contrast enhanced CT scan post ablation showing an area of necrosis (arrows). 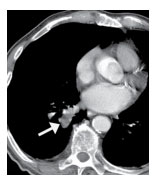 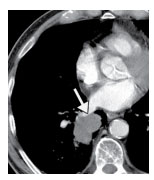 Figure 6: Microwave ablation of primary lung cancer in an 86-year-old man. (a) CT scan shows a microwave antenna in the mass along its superior portion. (b) On a post-procedural contrast-enhanced CT scan shows no enhancement within the lesion. (c) CT scan obtained at 9-month follow-up shows interval shrinkage and no enhancement of the mass (arrow).

Learning while sleeping? Our learning capabilities are limited…

Current weaning practices in a group of Maltese parents