Current state of the art approaches in Hepatobiliary Imaging 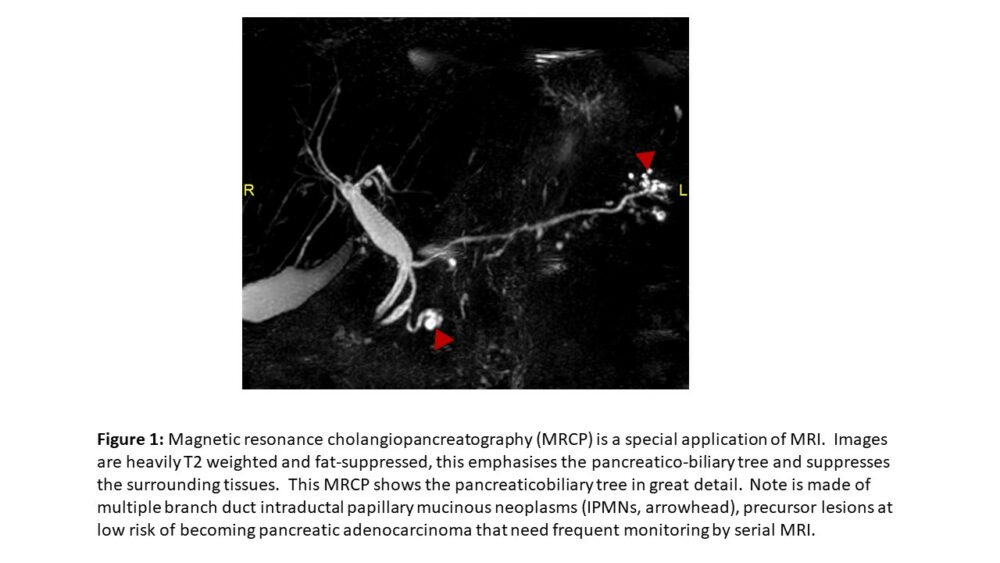 MRI of the abdomen is the current gold-standard imaging modality in a wide array of pathologies that involve the upper abdominal organs.  Up to a decade ago, it was very difficult to obtain good quality diagnostic images of any moving organ, including the liver.  Continued technological advance has nowadays made it possible to image abdomen, and even organs with fast continuous motion such as the heart.  MRI is a multiparametric exam – in that it is the only imaging modality that provides us with an array of different information; this is not only limited to ‘enhancement’ following administration of intravenous contrast (unlike CT).  The additional information that is provided includes the intrinsic T1 and T2 signal of the tissue under study (Figure 1), sequences that show us the presence of macroscopic or intracellular fat, sequences that show us the degree of diffusion of water molecules (diffusion weighted imaging, DWI), sequences that allow quantification of specific ions or macromolecules, and sequences that show us organ or lesion stiffness. 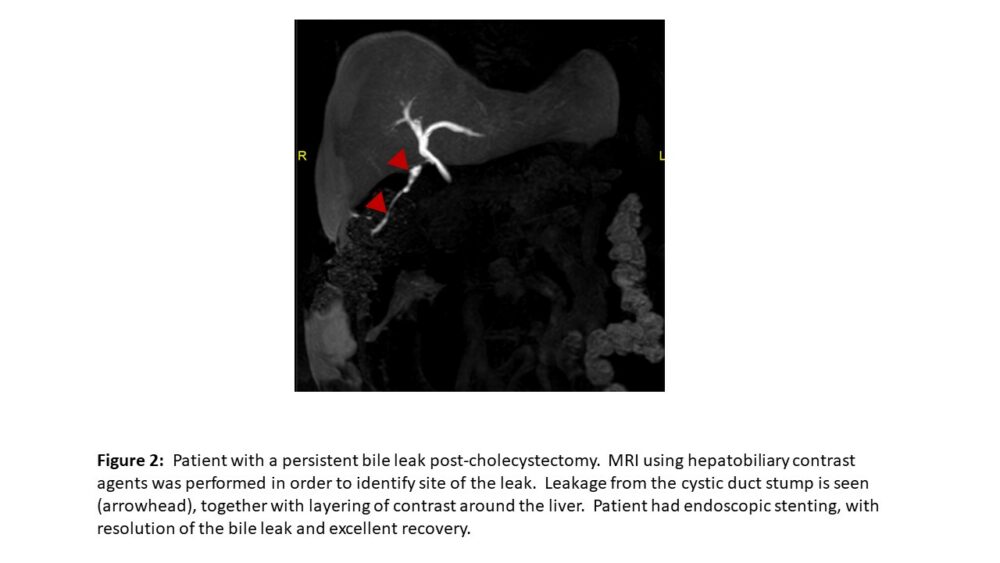 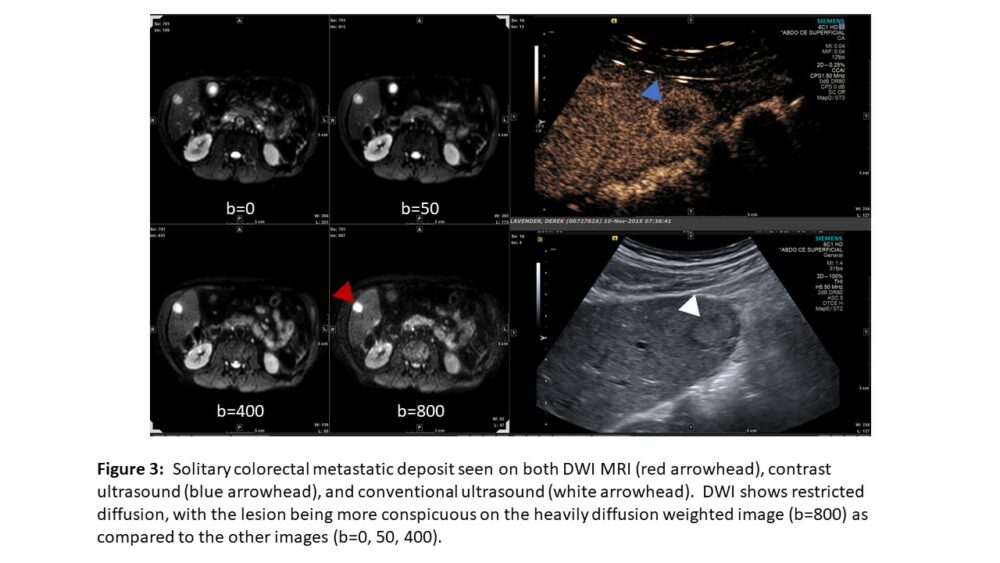 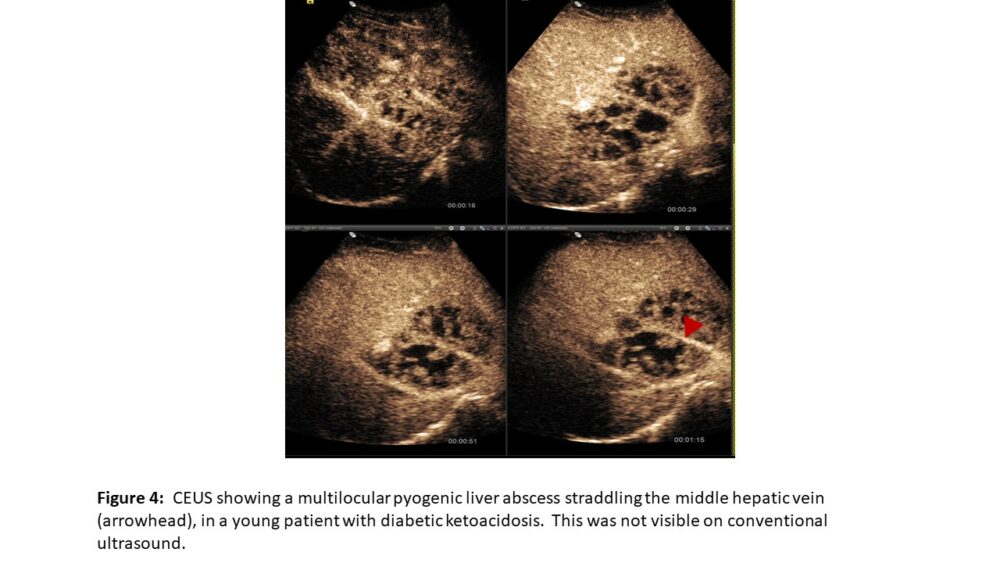 Contrast ultrasound relies on the use of microbubbles that are small enough to cross capillary beds (< 7µm).  Such microbubbles need to be stable enough to endure cardio-pulmonary transit before ending in the systemic circulation.  They also need to be stable enough to endure the low-energy ultrasound beam for the time required to reach a diagnosis.  Microbubbles react to the alternating compression and rarefaction of sound waves in the ultrasound beam.  They halve in size during compression and double in size during rarefaction.  This results in a strong reflected signal, allowing us to visualize individual microbubbles even though the mean diameter of microbubbles is 2.5μm.  The most widely available agent in Europe was approved in 2001 and consists of Sulphur Hexafluoride (SF6) stabilised in a phospholipid monolayer membrane.  Microbubbles are excreted via the lungs, allowing safe use in patients with renal failure.  CEUS is useful in a wide variety of clinical scenarios (Figures 3 and 4).  Contraindications are rare, and include a recent acute coronary syndrome, clinically unstable ischaemic heart disease, known significant right-to-left shunts, severe pulmonary hypertension, uncontrolled systemic hypertension, and acute respiratory distress syndrome.  Safety has not yet been established in pregnancy and lactation.

Chronic liver disease is becoming more and more common in the developed world.  This is mostly due to the increased prevalence of non-alcoholic liver disease (NAFLD).   Clinical, radiological, and biochemical features point to established cirrhosis, but not earlier potentially reversible fibrosis.  Fibrosis is a response to chronic liver injury and is thought to be mediated by hepatic stellate cells (myofibroblasts), located in the perisinusoidal space (space of Disse).  Accurate detection and intervention at the earlier stages of fibrosis has the potential to reduce morbidity and prevent end-stage disease, since early fibrosis is potentially reversible.

From a physics point of view, elastography aims to image the Young’s E modulus, which measures the force (per unit area) that is needed to stretch (or compress) a material sample.  All elastography techniques rely on the same basis: an external force is applied to the studied tissue and the resulting movements are then followed.

Traditionally, the presence and grading of fibrosis was achieved through image-guided percutaneous liver biopsy (PLB).  This has been considered as being the gold standard for the past 50 years despite numerous advantages, including the invasive nature of a biopsy (not an ideal test to keep monitoring disease in the same patient; however risk of serious complications is low), sampling variability (especially important since the specimen obtained represents less than 1/50,000 of liver),1 and high inter-observer variability during microscopic evaluation.2

Elastography can be performed using both ultrasound and MRI.  In both cases shear waves are generated in tissues following the application of a directional force which causes shear deformation.  One of the most extensively studied approaches in ultrasound is ‘point’ shear wave elastography (SWE) via acoustic radiation force imaging (ARFI).3 The force produced slightly displaces the tissue at the focal spot according to Hooke’s law. Following this, the transducer switches into imaging mode to detect displacements of the focal spot by tracking of the ultrasound signal (called “speckle”). This identifies the displacement of tissue with sensitivity of less than a micrometer.  ARFI elastography is very accurate – with areas under the curve ranging from 0.848 to 0.862 when compared to actual liver biopsies.4 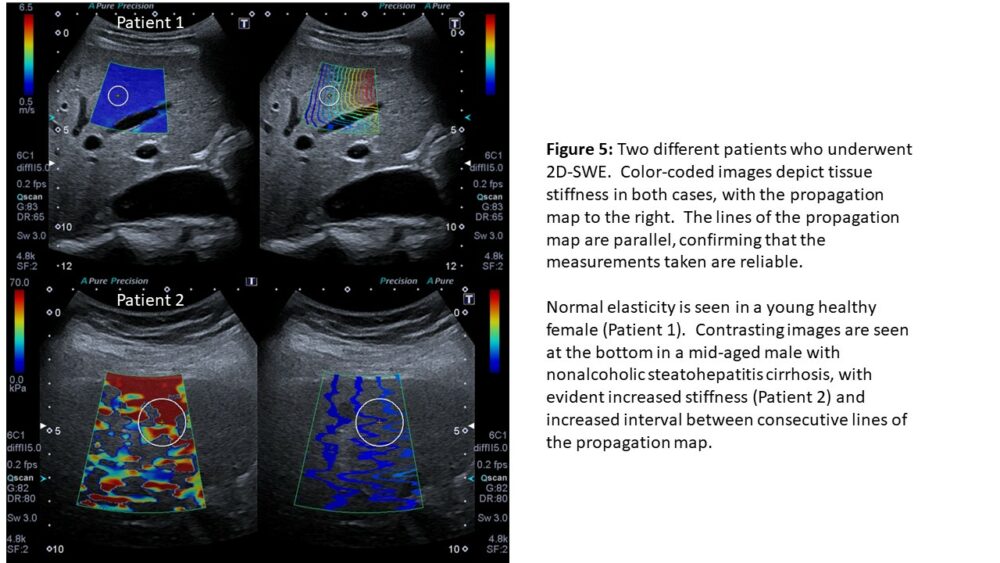 Another ultrasound-based approach is two-dimensional (2D) SWE (Figure 5), in which the elasticity profile of a larger section of tissue is evaluated.  Here shear wave arrival times (or “wavefronts”) at different locations are plotted, allowing a 2D map of shear wave properties within a section of liver to be generated.  Some manufacturers also display a propagation map, with contour lines to depict shear wave arrival times at different points in the tissues, in order to guide optimal sampling. 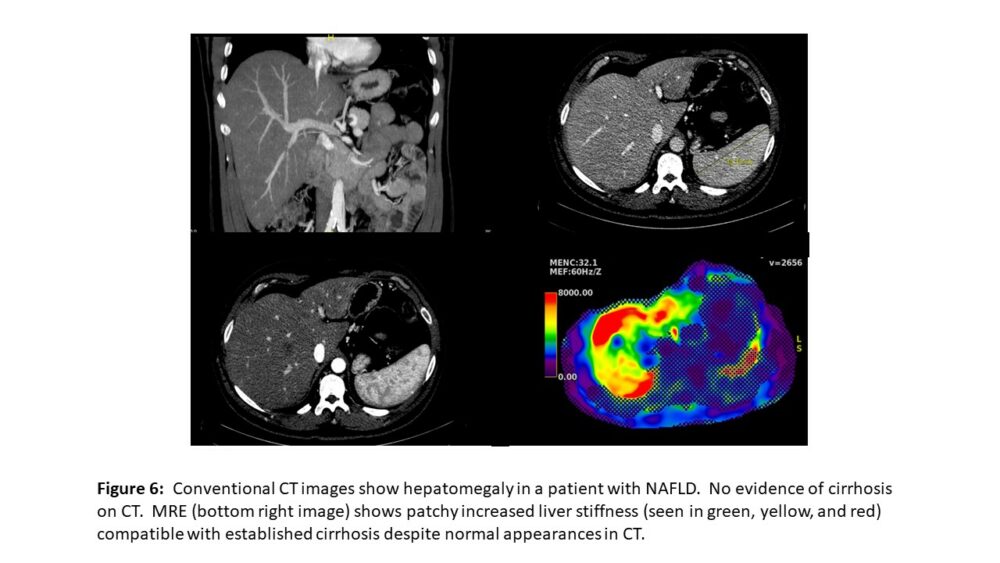 MRI elastography (MRE) is accomplished in 3 steps: generation of mechanical shear waves in tissue by an acoustic driver, imaging of these shear waves with a special MRI sequence, and processing of the wave information to generate elastograms.5  The volume of liver parenchyma assessed with a single slice of MRE is about 250cm3.  This is much higher than point shear wave elastography (0.5–1.0cm3), and nearly 500 times that of a liver biopsy (10–50mm3).6  MRE can show heterogeneous involvement of the liver in fibrosis (Figure 6), and is usually feasible in most patients (obese, bowel interposition, ascites).  However, the most important advantage when compared to ultrasound-based methods lies in its high reliability in diagnosing fibrosis in significantly obese patients, a major limitation in ultrasound.

Confounding factors that might decrease the accuracy of elastography include postprandial condition (patients must be fasted for at least 3 hours prior to elastography), elevated aminotransferases to more than 5x the upper limit of normal in the context of necroinflammation (seen in acute hepatitis or acute liver failure), right heart failure, and cholestasis.

COVID-19: A View from China

The Importance of CME