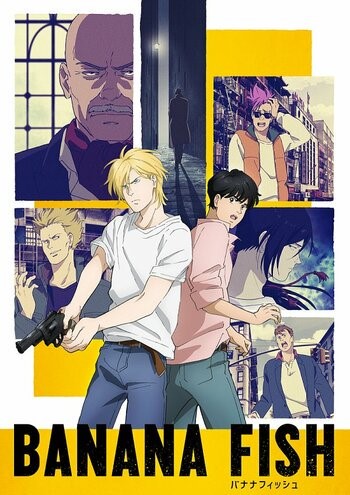 At the beginning of this crime thriller series the main character is initially at a loss if ‘banana fish’ was a person or a code, only later to determine it is the name of a drug in this fictional story. The title “Banana Fish’ derives from J. D. Salinger’s story “A Perfect Day for Bananafish” which is at one point referenced in this series, with a character going on to state that if one encounters a banana fish one suddenly wishes for death.

This tale brings together two boys from very different worlds and the unexpected intertwining of their fates. Aslan Jade Callenreese, referred to throughout the series as ‘Ash Lynx’ is motivated to learn more about his brother’s current condition after he was drugged in Iraq and is then in a zombie-like state uttering the words ‘banana fish’. Ash is portrayed as a an intelligent, respected, feared and charismatic gang leader with a dark past where he had been abused as a child, forced to appear in pedophilic tapes and trafficked for prostitution. Ash’s tragic past included recollections of being raped as a child by older men laughing like hyenas. Eiji Okumura on the other hand comes from a completely different background and initially meets Ash in New York when he came from Japan as a cameraman’s assistant for an article. Ash is skilled with guns and on how to handle street gangs and crisis situations whereas Eiji had never before held a gun or killed a man and initially has a culture shock. A strong friendship eventually develops between the two although the series is punctuated by instances where this perilous friendship was deemed both unadvisable and even very dangerous. Words of admonishment included ‘a rabbit and a lynx can never be friends’.

Near the start of the story Ash gives his doctor white powder asking if he knows what it is, to which the doctor comments that it does not look like heroin. He later partly identifies a constituent of the powder, namely the drug lysergic acid diethylamide (LSD).

They also note that the observed effects recorded for banana fish were ‘sporadic behavior, savagery, aggression, destructive behavior, increased blood pressure/pulse, pupil dilation and sudden self-destructive behaviour’. Other effects mentioned in the show include flashbacks, seizures and uttering nonsense. Later cracked encrypted data on banana fish showed it to be LSD, psilocybin and that an alkaloid was key. However there was no information about the alkaloid in the cracked data. Some chemical structural data is seen on screen as Ash delves further into the mystery. Researching further the exact nature of the drug component at the library, Ash hypothesizes it might not be derived from chemical synthesis. Mention is made of an alkaloid plant similar to extracts from peyote cactus. Ash’s report was shown to a psychopharmacologist who was impressed by Ash’s research into the matter. In the series it is revealed banana fish is made from a spontaneous mutation of the Brugmansia alkaloid.

These speculations on pharmacological identity occur on the backdrop of plot progression with numerous bullets, gunshot wounds and fatalities. In the midst of the mafia and street gangs, vengeance and assassinations, a special unique bond starts blossoming between Ash and Eiji, who at times proves to be Ash’s greatest weakness in a bloody tale of intertwining fates of tragedy and redemption.

Eventually the truth behind the creation of banana fish is told. A medical staff member had come up with the idea of making sums of money through drugs and the drug combination banana fish was created by accident. It is described by its creator as ‘the devil itself’. Its alkaloid based organic compound is said to cause symptoms that mimic heart failure and paralyses autonomic nerves. The creator references LSD hallucinations and possible ‘bad trips’, adding that with banana fish ‘bad trips’ are inevitable to all users and that its use is the amplification of a nightmare of negative emotions. In the show they also add that banana fish is difficult to detect. The user becomes susceptible to external stimuli through a form of drug hypnosis and a single use is enough to make the user go insane, lose all self-control and subconsciously believe anything.

Soldiers were used as lab rats. Later Ash’s friend Shorter Wong was injected with banana fish in an experimental lab following which he was toyed with against his will like a marionette to the point of being instigated to try and kill one of his comrades. Others saw potential in the drug as a strategic weapon. A National Mental Health Institute was founded with the alleged aim of treating criminals with mental health disorders. There patients lay like lifeless dolls as research was underway to perfect the drug. They aimed to remove of the violent side effects from the B1 drug prototype of banana fish, although also noting that repeated use of B1 resulted in decreased intellect. A criminal who raped and killed 3 nuns was given the drug to yield a very different individual altogether. Ironically Prof Dawson, the one who discovered banana fish was also subjected to B1 with subsequent changes of the brain’s neural pathway leading to his downfall.

Banana fish is also potentially a form of poison used for assassinations. Drugs and poison are referenced in this story with mention of Europe’s heroin market and the art of poison transcended in the Lee clan. As Ash’s life spirals further out of control, repeatedly cheating death as he accomplishes feats impossible to many others, reaching heights of respect and fear amongst mafia and gang members, Ash compares himself to Eiji as a lone leopard lying on the snowy tops of Kilimanjaro. Although the story is fictitious and the name chosen for the drug is a reference to Salinger’s story, individual components of the drug such as LSD and psilocybin are real entities. The Brugmansia plant containing scopolamine and other tropane alkaloids is also well recognized, hence bringing the story’s roots closer to the real world whilst at the same time adding fictitious elements and an enmeshing engaging plot.

Sonia Delaunay. A life as avant-garde, in collaboration with husband, working till forces and voice permitted

“Wealth shall reach everyone”