A vector-borne disease is one in which the pathogenic microorganism is transmitted from an infected individual to another individual by an arthropod or other agent. The transmission depends upon the attributes and requirements of at least three different living organisms: the pathologic agent which is either a virus, protozoa, bacteria or helminth (worm); the vector, which is commonly an arthropod such as ticks or mosquitoes; and the human host.

A vector-borne risk assessment was organised by the Infectious Disease Prevention and Control Unit in April 2009 with the help of experts sent by the ECDC. The aim was to identify the main vector borne diseases with public health relevance occurring on the Maltese islands and identify tools to detect and respond to vector-borne diseases related to health threats.
During this risk assessment, a total of 11 mosquito species were recorded from Malta. The main conclusion was that one of the mosquitoes, Culix pipiens, found in abundance locally, is the vector for West Nile Fever.

Surveillance continued throughout Summer and in September 2009, Dr Paul Gatt discovered the Aedes Albopictus mosquito or Asian Tiger mosquito on the island.

It comes from the mosquito family Culicidae and is characterized by its black and white striped legs, and small black and white body. The Asian tiger mosquito has a rapid bite that allows it to escape most attempts by people to swat it.

The female lays her eggs near water; not directly into it as other mosquitoes do, but typically near a stagnant pool. However, any open container containing water will suffice for larvae development, even with less than an ounce of water. 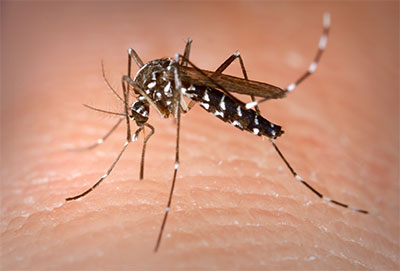 Adult females are aggressive daytime biters and prefer to bite outdoors. It is of public health importance because it is known to be a competent vector of at least 22 arboviruses. The most important ones are: Dengue, Chikungunya, Yellow fever, Japanese encephalitis and West Nile Fever. These diseases are characterised with sudden onset of febrile illness lasting one week. No specific treatment is available.
Chikungunya is characterised by sudden onset of high fever and severe joint pain. Other symptoms include rash, headache, fatigue, nausea, vomiting and myalgia.

West Nile Fever is characterised by fever, headache, myalgia, nausea, vomiting, rash on chest, back and stomach and swollen lymph glands. 80% of those infected with WNF are usually asymptomatic.

• Remove any water-filled containers like old tyres, food containers and buckets from your yard.
• Keep mosquitoes from breeding in bird baths, pet water dishes and paddling pools by emptying them at least every 2-3 days.
• Locate puddles that last more than three days, inlets to sewers and drainage systems holding stagnant water and drain them.
• Roof gutters should be kept clean of fallen leaves and other debris so that water does not collect in them.
• Flower pots, standing flower vases, knotholes and other crevices that can collect water should be filled with sand or fine gravel to prevent mosquitoes from laying eggs in them.
• Any standing water in pools and catchment basins that cannot be drained or dumped can be periodically treated with properly labelled insecticides.
• Do not leave fish ponds without fish.
How to minimise getting bitten
• Minimize outdoor activities during daylight hours when the Asian Tiger mosquito tends to bite.
• Minimise areas of exposed skin, if possible.
• Aerosol insecticides, vaporizing mats and mosquito coils can help to clear rooms of mosquitoes.
• Optimum protection can be obtained by using repellents on exposed skin (Products containing DEET.)
• Have secure screens on windows and doors.
• Use fans as these affect negatively their flying abilities.

Copper destroys MRSA at a touch