Celiac Disease is a chronic autoimmune process that is modulated by an environmental trigger, namely gliadin; a part of gluten which is present in wheat, barley and rye. Celiac disease is clearly increasing in prevalence worldwide and with easier access to screening tools the notion that it is a disease of Western society is increasingly being challenged. We have also seen a broader gamut of symptoms and disease conditions that are associated with celiac disease to the extent that the nomenclature of classic and non-classic manifestations seems redundant. The increased recognition in prevalence is poorly understood but seems to also reflect a true increase in incidence. These observations supported by constantly improving diagnostic techniques; including serologic, genetic testing and endoscopic modalities has frustratingly not been paralleled in any measure by any breakthrough in management.

The current prevalence of celiac disease in the Maltese population, based on the provision of gluten-free diet items through the government health service is 1.9 per 1,000 general population. This compares fairly well with similar, clinically diagnosed population based studies in Southern Europe and the Mediterranean Basin.1,2 Case recognition based on population screening programs however places the prevalence figures much higher; from 4 – 10 per 1,000 in most populations studied.

Amongst the commonest pitfalls facing the general practitioner is the selection of the appropriate, at-risk patient population who require investigation. These individuals include those presenting with both typical and atypical intestinal (constipation, vomiting) and extraintestinal manifestations (Figure 1). 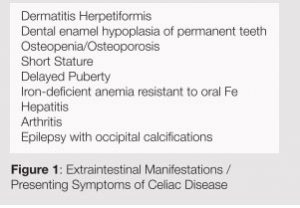 Also at increased risk are first and second degree relatives of affected individuals, individuals with other autoimmune disorders (IDDM, autoimmune thyroiditis, hepatitis, arthritis) and patients with genetic syndromes (Down, Turner, Williams Syndrome). In relatives, as in individuals at risk because of associated autoimmune or genetic syndromes it is important to stress with the family that serologic surveillance, if negative, needs to be repeated on a regular, usually every two year, basis.

The serologic testing available for the diagnosis of celiac disease has evolved over the last decade (Table 2). Anti-tissue transglutaminase (tTG) and antiendomysial (EMA) IgA serology offer the highest sensitivity and specificity albeit are not reliable in individuals with IgA degiciency. These individuals are, in turn, more susceptible to develop Celiac Disease and may be picked up by IgG based testing (EMA-IgG & tTGIgG). Therefore, total serum IgA testing is indicated in all symptomatic individuals being investigated for possible celiac disease.3 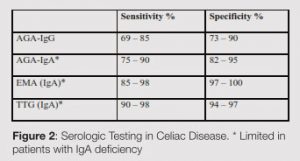 An exciting aspect of diagnostic testing has been the evolution of genetic testing. What is most clinically relevant at this point is the observation that either HLA haplotype HLA DQ2 or DQ8 need to be present if an individual is at risk of developing celiac disease. The converse however, does not hold true given the high incidence of these haploypes in the general, unaffected population. This offers a useful adjunct in screening at risk individuals and suspected cases with an atypical presentation.4

Although the mainstay of diagnosis remains duodenal biopsy, there is on the one hand a trend toward forgoing biopsy in symptomatic individuals with very high antibody serologic titres (anti-tTG IgA > 200). Although this strategy is attractive, it is as yet unsupported as standard of care. There is, on the other hand evidence that diagnostic sensitivity of biopsy is better with multiple, including duodenal bulb, biopsies. In cases where biopsy is negative in the context of positive serology or with atypical histology, wireless capsule endoscopy may be a useful adjunct in diagnosis. Capsule endoscopy is also indicated in individuals with suspected small bowel lymphoma complicating celiac or individuals unable to undergo traditional diagnostic endoscopy with biopsy5 (Figure 1).

Figure1: Scalloping of the mucosa in Celiac Disease on Wireless Capsule Endoscopy.

A central tenet of celiac management is patient education and compliance. It is important that celiac is understood to be a lifelong condition, that gluten is completely excluded and not allowing for any form of ‘diet holiday’, and that, in itself, a gluten-free diet is healthy, even for non-celiacs and with imagination and perseverance, can be palatable.

There are many barriers to compliance and it is best to gradually implement steps towards a strict gluten-free diet over a short period so as not to overwhelm caregivers. Compliance can be limited by lack of education or the availability of gluten-free foods, foods may be mislabelled and ingredients may change so that items that were ‘safe’ may come to include gluten over time. Compliance can also be challenged if the patient, especially if a child, receives mixed messages, if there is peer pressure or the need not to feel or act different in the case of a teenager. Time and food preparation constraints as well as eating out or travel abroad tend to be problematic in adults. It is important to provide adequate support and locally, we are fortunate to have provision of gluten-free food items through the government pharmacy service and to have an especially proactive and effective patient association (http://www. coeliacmalta.org/).

Multivitamin supplementation is generally indicated in celiac disease especially at the time around diagnosis if the child is malnourished. Specifically iron, folate, and rarely other micronutrients may be significantly decreased. Calcium and vitamin D intake tends to be decreased in celiacs, perhaps secondary to the dietary restrictions, but usually specifically because of concerns with lactose intolerance. It is worthwhile emphasizing to patients that secondary lactose intolerance may be a presenting sign of celiac, and that improvement or resolution of symptoms is the norm with dietary compliance and mucosal healing. Initially after diagnosis therefore, lactosefree milk or lactase enzymes can be used and eventually challenged with regular milk.

Celiac disease locally presents both challenges and opportunities; the former because our traditional notions of how celiac patients are diagnosed need to be revisited and because we as a society do not have in place a food labelling and monitoring infrastructure which is needed to support these patients. Nonetheless celiac disease presents the exciting possibility of a disease with debilitating manifestations that are reversible with safe and healthy dietary restriction alone

Dizziness in the Maltese Community Setting: the implications of good history-taking