The Avant-garde confronting with the “Other“ 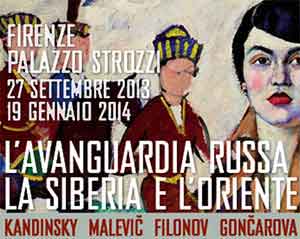 The Russian Avant-garde, Siberia and the East, at Palazzo Strozzi in Florence, is the first international exhibition to examine the fundamental importance of the Oriental and Eurasian connection to Russian Modernism. The exhibition follows the destinies of Russia’s self-proclaimed “Barbarians“ in their search for new sources of artistic inspiration. Neolithic stone figures, Siberian shaman rituals, popular Chinese prints, Japanese engravings, Theosophical doctrine and Indian philosophy are just some of the elements which inspired Russia’s new artists and writers as they developed their aesthetic and theoretical ideas just before and after the Revolution of October 1917.

Emphasizing the key role which radical Russian artists played in the development of Modern art over a century ago, this exhibition underscores their complex relationship with the Orient, both the Russian East and Far East. Leon Bakst, Alexandre Benois, Pavel Filonov, Natalia Goncharova, Wassily Kandinsky, Mikhail Larionov, Kazimir Malevich and other prime movers of the Avant-garde were deeply aware of the importance of the East and contributed to the rich debate – West or East ? – which left a profound and permanent imprint on their creative imagination.
The Russian Avant-garde was characterized by hold experiment and innovation, culminating in such works as Kandinsky’s Improvisations and Malevich’s Black Square, which have long been recognized as central to the history of the 20th – century European art, and was inspired by other traditions, notably those of the Orient. Bakst and Malevich, for example, were at the forefront of this cultural trajectory, the former with his costumes and sets for the Ballets Russes, paying homage to Shiva sculptures, Buddhist temples and Siamese costumes, the latter with abstract paintings informed by the Buddhist concept of nirvana. Kandinsky, Larionov and Vatagin studied shamanistic and Hindu rituals, referring to them in their paintings or sculptures; Goncharova, Konchalovsky and Mashkov reproduced Chinese and Japanese broadsheets in their still lifes. Theosophy, elaborated by Helena Blavatsky after her exposure to Indian philosophy, was an important influence on Russian painters, sculptors and writers of the time.
The exhibition invites the viewer to approach Russia’s innovative movements, from Symbolism to Cubo-Futurism and from Suprematism to Constructivism, not as extensions of Paris and Milan or as paraphrases of indigenous culture but as genuine tributes to the East – the Middle East, Siberia, China, Tibet, Japan and India. Goncharova exclaimed in 1913: “ We belong to Asia “.
During the 19th century the vastness of the Russian empire had been explored by numerous state and private expeditions to gather anthropological and ethnographical material. A consequence of these expeditions was the rapid expansion of museum collections in St. Petersburg and Moscow through the accession of significant objects such as Mongol and Buryat thangkas, sculpture and other works from Far East, as well as physical testimonies to shamanism and the rituals of the various ethnic Russian groups. The culmination of these expeditions to the Orient, which began in the 18th century , was the 1890-1 whirlwind tour of Tsar Nicholas to India, Ceylon, Java, Japan and China. The Tsar’s journey back to St. Petersbourg took him through the interior territories, acquainting him with indigenous peoples and exposing him to the vastness of the Russian state. It is precisely at this moment that the relevance of the Orient to the Russian people and to the Western or Eastern destiny of Russia became an important debate. A huge collection of souvenirs and gifts were transferred to a number of Russian museums including the Hermitage, the Kunstkammer and the Russian Ethnographical Museum.
The Burliuk brothers, Filonov and Konenkov, amongst many others, were well aware of these collections and exhibitions, studied them and imported images and motifs into their paintings and sculptures. The objects of these ethnographical collections have rarely left Russia and this exhibition is the unique opportunity to see some of the treasures which the Russian expeditions amassed together with the masterpieces of the Avant-garde they inspired.
The ethnographical items and specimens of Oriental art are displayed in much the same way in which the Avant-garde artists would have seen them, as bric-à-brac or a curiosity shop, the objects grouped in vitrines, subdivide according to the taxonomic idiosyncrasies if their original custodians and accompanied by original documentary photographs and other scientific data from the celebrated expeditions of the time. For example, Hokusai engravings are displayed alongside Chinese statues of Buddha next to the instruments used in shamanistic rituals.
Accompanying these antiquities and relics are the Avant-garde pictures and sculptures inspired by this “ pagan “ legacy, by the voices of the forest, by the silence of the glaciers of the north and by the inexpressible infinity of the steppe. So, we can see, just to mention some of them: Benois’ drawings for the costumes in Stravinsky’s Le Rossignol ( 1914 ) next to coloured Japanese prints; Bakst’s costumes for LesOrientales ( 1910 ) alongside Indian, Persian and Chinese textiles; Konenkov’s, Matiushin’s and Suvorov’s wooden figures next to shamanistic installations; Yakulov’s evocations of “ Asiatic “ perpective; Roerich’s primordial landscapes next to petroglyphs; Anisfeld’s paintings of Buddhas, Malevich’s Suprematism beside nirvanic elements; Kandinsky’s White Oval next to Theosophical forms; Filonov’s people and beasts alongside shamanistic animal spirits next to Rozanova’s thematic drawings.
The resulting vigorous interactions between works of art and physical objects enables the visitors to appreciate the “ alternative “ dimension of the Avant-garde as well as the mixed emotions of unease and physical attraction which the artists experienced when confronting the “ Other “.

Happiness can break your heart too