Pneumonia: Treatment with Vaccines instead of Antibiotics

Mycoplasma bacteria are one of the most common causes of bacterial pneumonia in children. 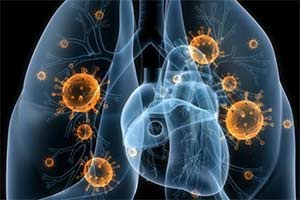 It is still unclear how the disease develops. Researchers from the University Children’s Hospital Zurich and UZH have now demonstrated that there are specific immune cells, so-called B cells, which are crucial for recovery from the infection. The antibodies produced by these cells eliminate mycoplasma in the lungs, whereas these bacteria can persist in the upper respiratory tract. The team of researchers cultured the bacteria with a fluorescent dye and were thus for the first time able to visually track the pathogen in the lung and upper respiratory tract during an infection. The findings from the newly developed mouse model mimic clinical observations in children, whose upper respiratory tracts still contained mycoplasma following an infection.

B cells with crucial role

“This data is the first proof that the antibody response is crucial to clear pulmonary infections caused by mycoplasma,” states Patrick Meyer Sauteur. These findings may help develop specific vaccines that elicit antibody responses to protect from infection: “Our work paves the way for the development of vaccines against mycoplasma. Target groups for such vaccines would include young children without treatment alternatives as a result of the emerging resistance to antibiotics against mycoplasma in certain countries,” concludes Meyer Sauteur.

Source: University of Zurich
Full bibliographic information:
Patrick M. Meyer Sauteur et al. The role of B cells in carriage and clearance of Mycoplasma pneumoniae from the respiratory tract of mice. Journal of Infectious Diseases. November 1, 2017.

The colon of patients with IBS reacts differently to bacteria

Was Author of Famed Gray’s Anatomy Textbook a Plagiarist?