Normal variants of the lower limbs in children

Normal lower limb variants in children are a frequent cause of referral to orthopaedic specialists and often a cause of parental concern. Physiological variants of growth may improve or resolve spontaneously and thus, do not need any surgical intervention. A thorough history and examination, as well as an understanding of the natural progression of angular and rotational variants will assist general practitioners to reassure parents and to identify any pathological conditions which require specialist management.

Musculoskeletal symptoms in children are a common presentation in primary care.1, 2 Parents are often concerned about the appearance of their child’s legs or their gait and general practitioners might have some difficulty in reassuring them. A number of referrals to orthopaedic clinics can be classified as physiological variants of growth2 which do not need any operative intervention.3 The aim of this review is to aid clinicians in identifying these normal variants and any abnormal characteristics which are indicative of an underlying pathological condition.

The most common variants of the lower limbs can be categorized into angular deformities,  rotational deformities and flexible pes planovalgus.

Genu varum (‘bow legs’) and genu valgum (‘knock knees’), the most frequently encountered angular deformities, refer to the tibiofemoral angle in the coronal plane, which can be evaluated by measuring the intercondylar and intermalleolar distances (Fig 1). Physiological variants tend to be symmetrical and painless. Normally, up to the age of 18 months and as the child begins to walk, genu varum (mean 15 degrees) can be noted. The normal tibial torsion frequently seen in this age group further exacerbates this manifestation and therefore, referral for genu varum is most common in the 10-14 month age group. As the child grows, the knees tend to go into a valgus position (mean 12 degrees) which, after 7 years of age, gradually corrects itself to the normal 7-8 degrees of valgus seen in adults.4 Consequently, referral for genu valgum generally occurs at 3-4 years of age. One must keep in mind that the normal physiological genu valgum may be exacerbated by flatfeet, ligamentous laxity and obesity.5 Alarm symptoms include pain, asymmetry, progression, unilaterality or association with other deformities e.g. short stature. Genu varum over the age of 2 years is a red flag and requires specialist referral to exclude an underlying pathological condition such as Rickets or Blount’s disease.

Presentations for painless genu varum also peak in adolescents participating in high impact sports such as football or rugby. The reason for this is suspected to be the result of high sporting demands on the developing skeleton.2 There is currently no concrete guidance which can be given to these individuals; however, if associated with pain, further investigations are necessary to exclude any co- existing pathology e.g. meniscal tears. 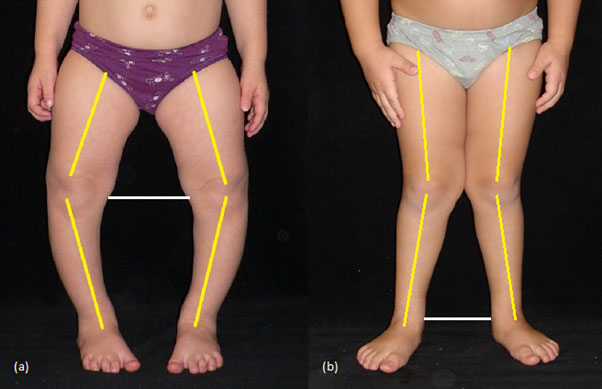 The most common presentation for rotational deformities is an in- or out-toeing gait. Although foot position is the most noticeable symptom, the hips and tibias also contribute to the rotational profile of a child. Despite being a common concern, only 0.1% of these deformities persist and are severe enough to require operative intervention.8

The commonest causes of an in- toeing gait are the following:

Internal tibial torsion is the most frequent cause for in- toeing between 1-3 years of age. It is often bilateral and resolves spontaneously by the age of 6 years. It is also thought to be the result of intrauterine positioning.8, 9 Parents present with concerns of a clumsy gait and frequent falls, and examination when prone reveals an increased thigh foot angle (Fig. 2).8 Normal thigh foot angles vary from a mean of 5 degrees internal rotation in infants to 10 degrees external rotation from the age of 8 years.9 Pathological or physiological genu varum may be present and 33% of cases, are associated with metatarsus adductus.8 Most cases are treated conservatively but if functional problems with severe deformity persist beyond the age of 6-8 years, operative intervention may be considered.9 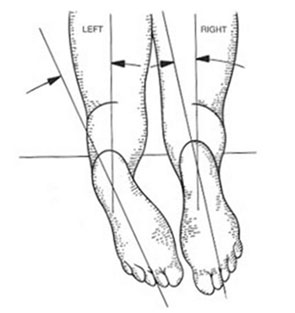 Femoral anteversion refers to the angle created between the femoral neck axis and the transcondylar axis of the knee2 (Fig. 3). At birth, 30-40 degrees of femoral anteversion is normally present, which gradually decreases with growth to the normal 16 degrees in adults. Generally children with increased femoral anteversion present at 4-6 years of age, with an in-toeing gait, frequent falls and an eggbeater pattern when running.2, 11 They sit most comfortably in a ‘W’ position2, 11 (Fig. 4). It is often bilateral (a unilateral abnormality should be of concern), hereditary and is twice as common in girls. It is associated with other packaging disorders e.g. internal tibial torsion, and usually resolves spontaneously by the age of 10 years. Examination reveals increased hip internal rotation to >70degrees and decreased external rotation to <20degrees when prone (normal internal rotation is 20-60 degrees and external rotation is 30-60 degrees).11 80% of cases are treated conservatively and parents can be reassured that there is no increased future risk of hip/knee osteoarthritis or impaired function.2 Orthotic devices/physiotherapy do not alter its progression.2, 11 If <10 degrees of external rotation is observed in the older child11 or if persistent into teenage years with resultant cosmetic concerns, a corrective osteotomy may be offered.2 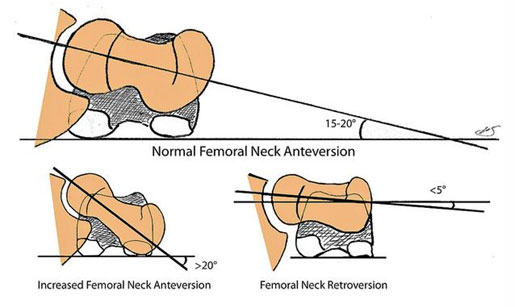 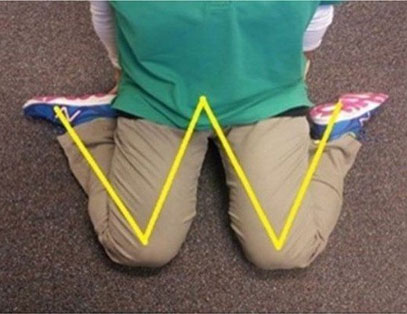 Metatarsus adductus (‘banana foot’) is one of the most frequently encountered congenital foot defects,8 characterized by a curved lateral foot border secondary to an adducted forefoot (at the tarsometatarsal joints) and a normally aligned hindfoot (Fig. 5a). It is unilateral in 50% of cases and may be seen in cases of oligohydramnios, first and late pregnancies and twin pregnancies. In 95% of cases, it resolves spontaneously by the age of 4 years.  Examination reveals a heel bisector line which passes beyond the 2nd webspace (Fig. 5b) and a crease in the medial border may be seen in the rigid variant. The latter is associated with developmental dysplasia of the hip 2 and merits specialist referral for close monitoring. Non-operative management usually involves regular passive stretching by the parents, casting of the foot to maintain a proper alignment 10 or use of reverse last shoes. Up to 14% may progress in severity requiring operative intervention after 4 years of age.2 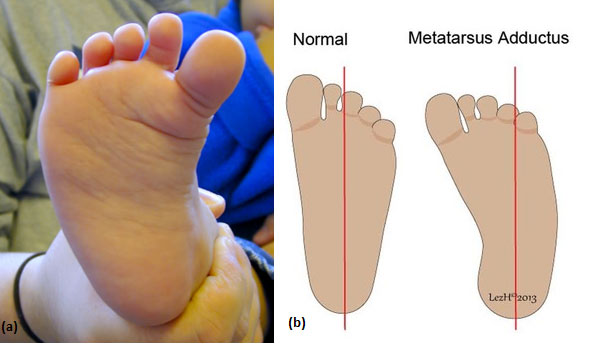 Up to 2 years of age, an out- toeing gait may be noticed.8 Above this age group, out- toeing may be due to external tibial torsion or less commonly femoral retroversion, especially in obese children. If unilateral and in older children, Perthes’ disease or slipped capital femoral epiphysis should be excluded.2 Unlike internal tibial torsion, external tibial torsion worsens with skeletal maturity as the leg normally externally rotates with growth and may therefore result in long-term disability. It is more commonly seen in adolescent girls with anterior knee pain or patellar instability due to patellofemoral malalignment.  Although first line treatment is conservative, tibial or femoral derotational osteotomies may be necessary.15

90% of musculoskeletal presentations in children concern flat feet. All neonates and toddlers have flat feet due to a fat pad beneath the medial longitudinal arch of the foot, lack of neuromuscular control and ligamentous laxity.2  It usually resolves spontaneously by 4-8 years.16 Although asymptomatic, presentation is often due to parental concern about the appearance of the foot or the fear of pain or long-term disability. It is commonly associated with obesity and hyperlaxity and is usually familial.2 Examination reveals a valgus hindfoot with a flattened medial longitudinal arch which reconstitutes when standing on tiptoes or hallux dorsiflexion16 (Fig. 6).  No treatment is required for flexible flatfeet and parents can be reassured that the arch will develop with growth.16 Insoles are commonly used however Cochrane reviews have shown that they are ineffective and cause unnecessary pain and discomfort.2

A detailed history and examination (Box 1) is essential. Occasionally malalignment of the lower limbs may be a symptom of an underlying condition e.g. neuromuscular disorders including cerebral palsy.2 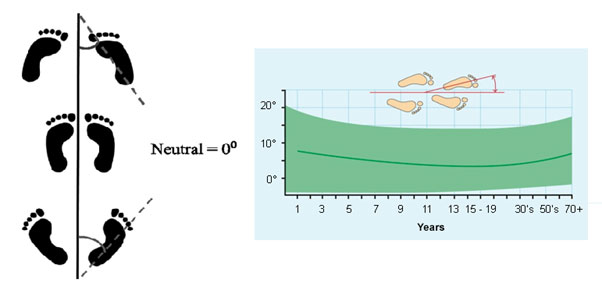 I would like to thank Mr Thomas Azzopardi for his guidance during the writing of this review.