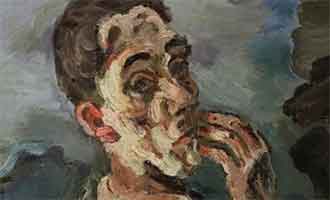 No previous exhibition has delved as deeply into the life and oeuvre of Oskar Kokoschka as the one at Leopold Museum in Wien: “ Kokoschka. The Self in Focus “.

This has been achieved by juxtaposing in an excellent way the photography and painting and by allowing these two media to enter into a dialogue with each other. Alle biography and chronology are presented in a series of big rooms in a extremely intriguing way. Kokoschka loved photography and manily to be photographed in an artistic way by real artistic photographers, so the variety and quality of these photographs provide a film-like sequence tracing a fruitful life; he used photography as a mean of self-dramatization all throughout the 20th century.

The painter, graphic artist, dramatist and essayist Oskar Kokoschka is doubtlessly among the most important protagonist of modernity. His works not just as a painter is tremendous and has earned him a firm place in art and literary history. He took on a variety of different roles, dramatizing the self and cultivating the mise-en-scene. He combined contradictory traits and always remained animated, playing the part of a martyr and Parsifal, a militant prophet and Tristan, a secularized Man of Sorrows and savior of the world.
He wrote: “ I was only a little boy back then / and yet my face looks the same as always, do you recognize me / my dear Tamariske “. “ The fact that Loos saw my paintings as works of art was something I could barely understand and took as flattery. “ “When I hear the name Kokoschka, I always see a timid young boy “

“ People used to love their work, for it meant shaping and creating something. Just like the animals – just look at ants. They don’t work for money but because they have the urge to create something. The same goes for bees or weaver birds, or whatever species. It is a new occurrence in recent times that we spend our lives for money and naturally miss out on life in the process “.

He was versatile, often provocative and controversial not only as an artist but also as a person. While he was considered an “ enfant terrible “ in his early years, he was vilified during the National Socialist era as a prominent “ degenerate “ artist not just for his art but also for his opposition to the regime. In allegorical paintings he criticized the Allied Forces’ hesitant approach towards Hitler’s aggressive war policy.

“ I was surprised how phlegmatic the English were, they did not seem to be aware of the coming war, while the people on the continent were like a panicked flock of sheep being guided into the abyss by the Führer.[Oskar Kokoschka, My Life, 1971]
„A great success! The exhibition Degenerate »Art« had two million visitors. Never before had my paintings been seen by two million people.” Oskar Kokoschka, in: Der Spiegel, 1951

In 1923 Kokoschka created the chalk lithography Self-Portrait from Two Sides which was first exhibited in 1923 at the Kunstsalon Wolfsberg in Zurich. For the exhibition’s poster Kokoschka used a similar motif with only slight variations. The Cubist effect of this self-portrait provided the critics with yet another opportunity to polemicize against Kokoschka’s avant-garde style.
During his first months in Prague, 1935, , Kokoschka made the acquaintance of the lawyer Dr. Karel B. Palkovský. He invited the artist to his home where he met his wife Lidai and their only daughter, the 19-year-old Olda (1915–2004). Olda studied law and graduated in 1938. She soon became a close friend and companion to Kokoschka and in 1941 became his wife. Photographs from their time in Prague document the couple’s relaxed and happy relationship with each other. Sometimes Olda took to the camera and experimented with photographs herself. But their future together looked far from promising. Having been vilified by the National Socialists, Kokoschka’s life was in serious danger. In October 1938 Olda organized the couple’s emigration to England and financed the airline tickets herself.

Kokoschka had a great admirer in the Austrian-Czech sugar merchant and art collector Ferdinand Bloch-Bauer (1864–1945) whose wife Adele Bloch-Bauer had been immortalized in two legendary portraits by Gustav Klimt before her death in 1928. Through Carl Moll, Kokoschka received a commission to portray Bloch-Bauer in 1935. Work on the portrait lasted until the summer of 1936 and was mostly carried out at Bloch-Bauer’s Panenské Břežany castle near Prague. Kokoschka deposited his salary of 60.000 Czech Koruna in Bloch-Bauer’s Viennese bank account, but it was seized by the National Socialists in 1938 along with the rest of the industrialist’s possessions. Bloch-Bauer, who had fled to Switzerland, regained Kokoschka’s portrait in 1944 and donated it to the Kunsthaus Zürich two weeks later.

In allegorical paintings he criticized the Allied Forces’ hesitant approach towards Hitler’s aggressive war policy.
From May to July 1949 Oskar and Olda Kokoschka stayed in Rome where the artist was photographed by the German photographer Herbert List (1903–1975). Herbert List, who had had close ties with the artists of the Bauhaus movement in the 1930s, had been forced to leave Germany for political reasons in 1936 and subsequently worked as a professional photographer in London and Paris. When he moved to Rome in the late 1940s, he closely followed the development of Neorealism in Italian film, a movement that was to influence his photographic oeuvre. List’s portrait series of Kokoschka is equally characterized by a crude, unsparing realism. The artist’s strained, scrutinizing look was captured as unrelentingly as every single line and irregularity of his physiognomy. It is surprising that these overly realistic portraits were to become the photographs of Kokoschka most widely used by the contemporary press.

The first major Kokoschka exhibition in Vienna after the war was held in autumn 1955 at the Vienna Secession. The famous Viennese photographer Franz Hubmann (1914–2007) captured the exhibition opening in a series of photographs. The pictures show Kokoschka in action, as it were, gesticulating heavily while explaining his works to the large audience. A representative of the style of life photography, Hubmann’s main interest was to chronicle the lives of average Viennese citizens. His photographs of Kokoschka reveal his special talent for spontaneity and for conveying a sense of atmosphere and animation.

His numerous portrait commissions from notable politicians earned Kokoschka the reputation of »court portraitist« to German politicians in the local tabloids. It is no coincidence that the most striking photographs of the artist at the time were taken by the press photographer Sven Simon (1941–1980), the son of the newspaper proprietor Axel Springer. In his press photographs Sven Simon liked to label Kokoschka »the most famous living painter on earth«. In a 1968 edition of the magazine Eltern Sven Simon published a photograph of Kokoschka as an »arsonist« for a photographic series entitled »Photographed for parents: Fifteen celebrities dressed to reveal what they hoped they would grow up to become when they were children«. Sven Simon also shot the cover photograph for Kokoschka’s autobiography My Life published in 1971
Even at an advanced age, Kokoschka still took an active interest in international politics. The lingering conflict between Israel and the Middle East prompted the 87-year-old artist to visit Jerusalem in 1973 in order to portray the main protagonists of Israeli politics. With a drawing pencil he captured the faces of the prime minister Golda Meir, the president of the Israeli supreme court Shimon Agranat, the defense minister Moshe Dayan and the mayor of Jerusalem Teddy Kollek. It was important to Kokoschka to also portray important non-Jewish representatives of the country, including the Greek Orthodox Patriarch Benedictos I and the head of the venerable Omar Mosque Sheikh Mustafa Khalil el-Ansari. Gilbert Lloyd, the son of the London art dealer Frank Lloyd, documented the portrait sittings in an impressive photographic series.

Kokoschka himself had captured his wife in an impressive double portrait in 1963. Olda was a great support to Kokoschka. With her characteristic prudence, she managed her husband’s practical affairs and ensured that he could dedicate himself fully to his art. Her language skills were a great asset to the couple on their travels and also made her an indispensible assistant with Kokoschka’s literary work. After her husband’s death, Olda Kokoschka bequeathed his works to various institutions, including the Fondation Oskar Kokoschka in Vevey, which she had set up herself, the Oskar Kokoschka-Zentrum of the University of Applied Arts Vienna as well as the Zentralbibliothek Zürich.

The Kokoschkas spent the 2nd of January 1980 together in their house in Vevey. Olda was reading to her husband, as she often did, and he was listening attentively. Angelika Spielmann, the wife of Kokoschka’s biographer Heinz Spielmann, captured thE scene with her camera. Several hours later Kokoschka suffered a stroke from which he would not recover. Oskar Kokoschka died on the 22nd of February 1980 in a hospital in Montreux. Kokoschka had remained astute right until the end of his life and had worked on the documentation of his oeuvre. Along with numerous publications on his painterly oeuvre, he published his autobiography My Life in 1971. Four volumes of his literary works were published between 1973 and 1976. In 1974 Kokoschka’s last play Comenius was made into a film that features the artist in its closing scene.