Despite the large number of procedures performed, complications are uncommon. However, the number of requests for imaging to exclude such complications is increasing so the radiologist must be familiar with the related imaging findings. Irrespective of the location and type of plastic surgery, complications are mostly minor and display common themes; these include seromas, haematomas, infection, migration, vascular and nerve compression, fibrosis, foreign body reaction and rupture or breakdown of the implant.2 Some imaging findings noted after plastic surgery procedures are not complications at all; they are anatomical changes related to the procedure that will not cause any detriment to the patient.

The subject of breast implant assessment and the value of MRI and US have already been discussed in the last issue of this Journal.3 Besides implant breakdown, there are other findings that may be noted on cross-sectional imaging that may be of clinical importance particularly in breast cancer patients who have had breast reconstructions.

Fluid around the silicone implant may be due to implant rupture; most ruptures remain within the fibrous capsule that the body creates around the implant (intracapsular) and may be difficult to distinguish from other fluid collections (Fig 2). Extravasation of silicone outside the capsule is known as extracapsular rupture. MRI is the best imaging tool to detect intra and extracapsular ruptures; the features of implant rupture have been described in previous issues of The Synapse Journal.3,4 Detection of implant rupture should prompt implant replacement. The use of MRI will confirm the presence and type of rupture and will help exclude other complications, particularly cancer recurrence in breast cancer patients.

A further complication of breast augmentation surgery is fibrosis or capsular contracture; it is uncommon, occurring in less than 5% of cases.5 Like any foreign body, breast implants result in the formation of a fibrous layer around them that represents the implant capsule. Excessive fibrous reaction results in capsular contracture with tightening around the implant that may lead to a misshapen implant that rides high in the chest wall resulting in a hard and immobile breast and may cause pain (Fig 3). There is an increased likelihood of capsular contracture in the presence of fluid collections or abscesses, an implant leak, after radiation therapy and following breast trauma. Contractures are also likely consequences of a foreign body reaction to the implant. New textured implants have been developed that reduce the likelihood of capsular contracture, however the FDA is currently investigating reports relating these implants to ALCL. The treatment for contracture is capsulectomy with implant replacement.6

Commonly known as “tummy tuck”, abdominoplasty may be performed to adjust disproportional fat distribution, to correct abdominal skin redundancy or myofascial laxity/diastasis, or for weight loss with or without bariatric surgery. Abdominoplasty has been performed since the 1980s, but it has evolved considerably since then. It is now a complex procedure that involves an incision from hip to hip, subcutaneous release of the umbilicus, dissection of the subcutaneous soft tissues along the rectus sheath superior to the costal margin, midline muscle plication, and resection of redundant skin, followed by skin closure. Plication of the rectus muscles, which is done to reduce outward protrusion of the abdomen, results in changes that are easily identified on CT and MRI (Fig 4).

The most common complication of abdominoplasty is a seroma that results from accumulation of fluid between the deep fascia and the skin/subcutaneous fat flap. These are readily confirmed with US or CT (Fig 5). Smaller seromas may be observed while larger ones will require needle aspiration that is best performed under US guidance. The use of specifically designed compression garments reduces the risk of seromas.

Liposuction was initially described in the 1970s, but the technique was revolutionised in the 1980s and remained largely unchanged since then. This is the most common form of plastic surgery after breast augmentations. It is commonly combined with abdominoplasty in a procedure termed lipoabdominoplasty. It essentially involves insertion of blunt cannulas through small skin incisions to aspirate fat from the deep subcutaneous tissues; it has been used in all parts of the trunk and limbs to reduce unwanted subcutaneous fat. Following liposuction, CT and MRI show linear cannula tracks in the deep subcutaneous tissues (Fig 4).

Although uncommon, wound infection may occur with liposuction, which consists mostly of uncomplicated cellulitis. Seroma and haematoma formation may also occur following liposuction, however these rarely require intervention. Rare complications include abdominal wall perforation and venous thromboembolism, both of which can be avoided by careful technique.

Autologous fat grafting involves harvesting fat from one site where removal is aesthetically desired, such as the abdomen or thighs, and transferring it to other areas for augmentation in the same patient, commonly to the buttocks and breasts. Other terms used for this procedure include lipografting, liposculpture, lipotrasfer and lipofilling.

Different techniques for harvesting fat are being developed to maximise the viability of harvested tissue. Effectiveness at the receiver site depends on the location of injection, which may be subcutaneous, subdermal or intramuscular with surgeons often using a combination of injection sites.

At the harvest site, cannula tracts are seen on CT and MRI, while at the graft site injected fat may not be discernible from native fat. Linear stranding may be present in subcutaneous graft sites, while fat is readily visible if injected intramuscularly (Fig 6).

Complications related to fat transfer sites include infection and nerve or vascular compression and are best imaged with MRI. Contrast-enhanced MR images will show enhancement within the compressed nerve resulting from neuritis and within the walls of abscess cavities (Fig 7).

Soft tissue fillers are among the most popular minimally-invasive plastic procedures performed today. They can be used anywhere but are most often employed in the face and hands. The most commonly used fillers are collagen, hyaluronic acid, calcium hydroxyapatite or poly-L-lactic acid based. Fillers are best evaluated by MRI, but CT and US are also useful (Fig 8). Complications related to the use of fillers are uncommon. Early complications that occur in the first few weeks include overcorrection, hematoma, infection, and transient erythema and/or oedema. Late complications occur more than 6 months after the procedure and include foreign-body granuloma formation, infection, compound migration, and cross-reactions between different fillers. If placed under aseptic conditions by licensed and experienced medical professionals, soft-tissue fillers have a low incidence of complications.

Soft-tissue augmentation and implants are used frequently in plastic surgical procedures. The associated imaging findings must be readily recognised by the radiologist. These procedures may be performed purely for cosmetic reasons or for reconstruction after cancer surgery or other chronic illnesses. Complications, although rare in expert hands, must be readily recognised on diagnostic imaging and distinguished from normal post-operative findings. 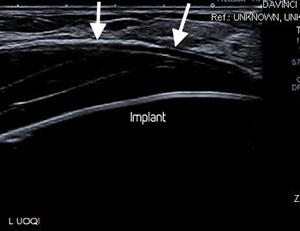 Figure 1: a. Breast US showing a fluid collection (arrows) superficial to an implant. 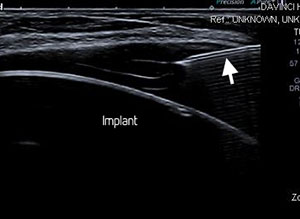 Figure 1: b. US-guided aspiration showing the needle tip (arrow) within the fluid collection.

Figure 2. Silicone-selective MRI image showing a simple fold in the elastomer shell of the right implant (dashed arrow) and an intracapsular rupture in the left implant (solid arrow) with fluid outside the folded implant shell. 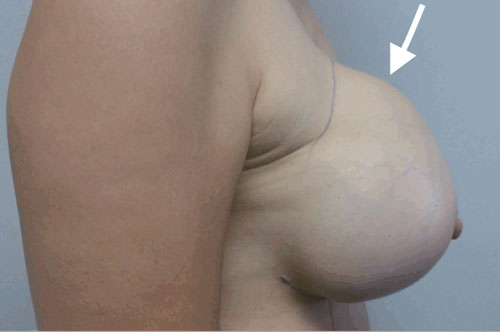 Figure 3. a. High-riding implant (arrow) is a feature of capsular contracture; pain, hardness and immobility represent other common clinical features. 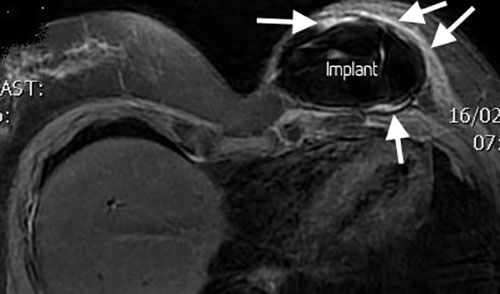 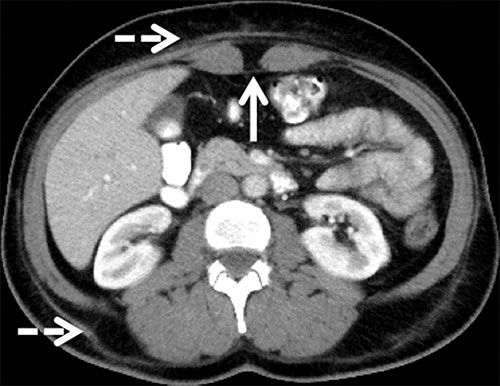 Figure 5. Sagittal CT image of the midline of the abdomen showing a seroma (arrow) occurring 3 weeks after abdominoplasty. Typical inward protrusion of the rectus muscles and surgical clips (dashed arrows) due to rectus plication are also depicted. 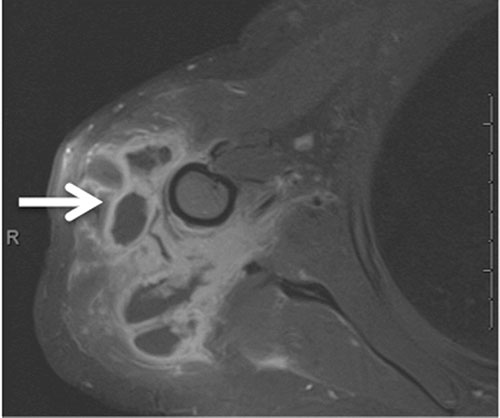 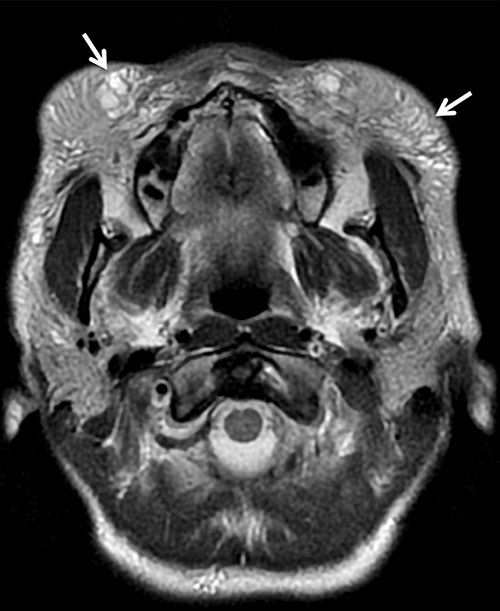