I gG4 autoimmune disease (or hyper IgG4 disease) is a relatively recently described systemic disease that is characterised by abundant infiltration of IgG4-positive plasma cells and lymphocytes with associated fibrosis leading to organ dysfunction.

Diagnostic criteria for IgG4- related disease have not yet been established, however any one or more of the following are presently used: (a) characteristic histo-pathologic features, (b) characteristic imaging findings with elevated serum IgG4 levels, and (c) good response to corticosteroid therapy. Multi-organ involvement is the primary indicator that we may be dealing with this autoimmune condition; however multi-organ involvement is also seen in malignant disease particularly lymphoma.

Histo-pathologic analysis of biopsy material shows that IgG4-related disease is characterized by diffuse lymphoplasmacytic infiltration, irregular fibrosis, occasional eosinophilic infiltration, and obliterative vasculitis. Some IgG4-positive plasma cells can be detected in several inflammatory disorders; however, the diffuse infiltration of numerous IgG4-positive plasma cells is characteristic of IgG4- related disease. Serum levels of IgG4 are also elevated and a value 135mg/ dL has been claimed as indicative of the condition, however this has not proved to be as accurate as previously suggested.

Since imaging is a primary tool for the diagnosis of IgG4-related disease, the following paragraphs will outline the imaging findings in the more commonly involved organs. 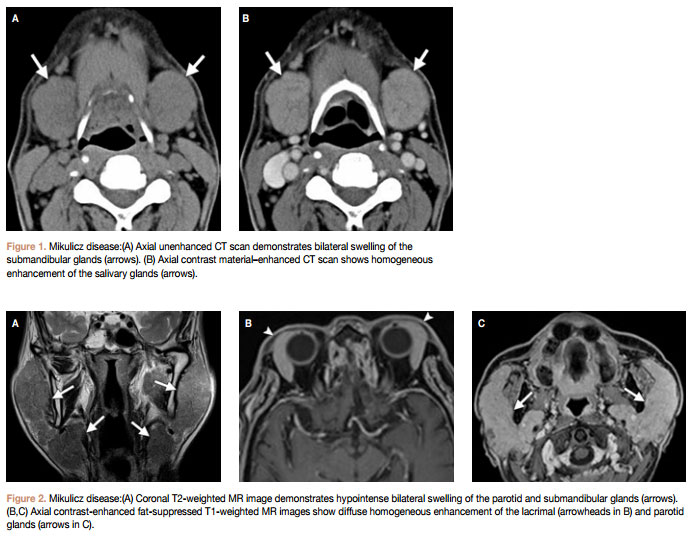 Salivary gland involvement with pathologic conditions such as Mikulicz disease and chronic sclerosing sialadenitis (Küttner tumor) are not uncommon; these are now considered to be part of the spectrum of IgG4- related disease. CT findings of Mikulicz disease include diffuse enlargement of the salivary glands with homogeneous attenuation and homogeneous enhancement with IV contrast administration (Fig 1). MRIfindings of Mikulicz disease include glandular enlargement with low signal on T2- weighted images (due to high cellular density and a fibrotic component) and homongeneous enhancement similar to that seen on CT (Fig 2). A further characteristic finding of Mikulicz disease is parallel involvment of the lacrimal glands. On the other hand, Küttner tumor is characterised by a more marked fibrotic component and hence lower signal intensity on T2- weighted sequences; it is also more commonly unilateral than Mikulicz disease.

Sinus and nasal mucosal involvement may occur with IgG4- related disease. Parallel involvement of other organs particularly the salivary and lacrimal glands help confirm the diagnosis (Fig 4), however biopsy is required when disease is only located at this site. Imaging findings are similar to those seen in the salivary glands with low T2 signal and marked contrast enhancement. Important additional imaging features include absence of bone distruction and perineural extension (along the cranial nerves). The latter feature however is also seen in squamous cell carcinoma, adenoid cystic carcinoma and lymphoma. 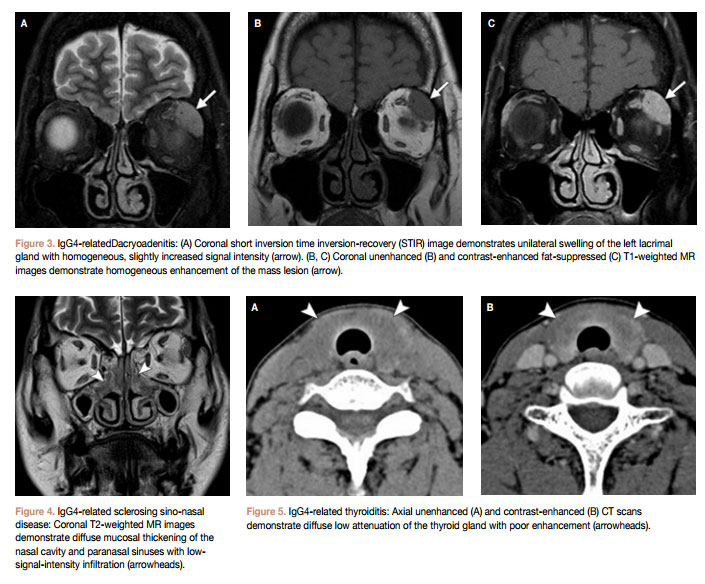 Hypophysitis is a chronic inflammation of the pituitary gland. There are many causes for hypophysitis that are classified by location or histologic findings; the latter include lymphocytic, granulomatous, xanthomatous, necrotizing, or IgG4 plasmacytic infiltration (Fig 6).

Lymph node involvement is common in the cervical (Fig 7), mediastinal, hilar, peripancreatic, para-aortic, and mesenteric regions. Lymph nodes generally show low T2 signal on MRI, with homogeneous contrast enhancement on CT and MRI. These findings and also the shape of the involved nodes are however nonspecific, making it difficult to differentiate IgG4-related disease from inflammatory reactive nodes, sarcoidosis, lymphoma, or metastasis.

IgG4-related disease is now noted to be associated with an increasing number of previously known diseasesof the chest. Fibrosing mediastinitis is one such condition (Fig 8). 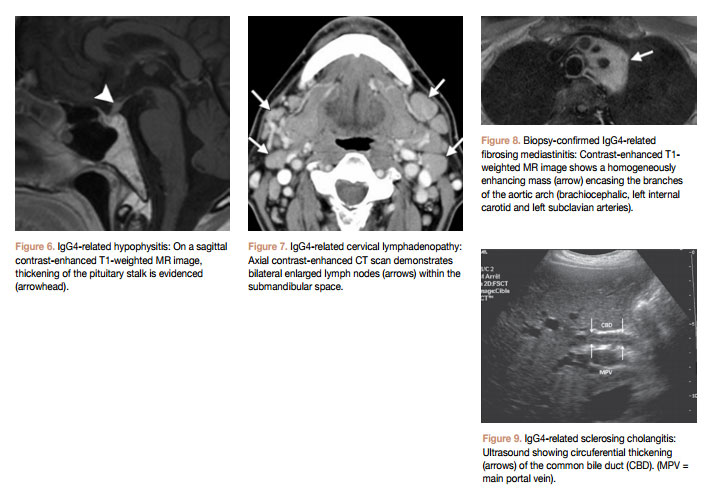 Sclerosing cholangitis, autoimmune pancreatitis, and retroperitoneal fibrosis are increasingly being reported in IgG4-related disease. Concurrent imaging findings of more than one of these entities is particularly helpful in diagnosing IgG4-related disease. Sclerosing cholangitis presents with concentric thickening of bile duct walls (Fig 9) and proximal biliary and pancreatic ductal dilatation (Fig 10). Autoimmune pancreatitis is seen on CT and MRI as diffuse enlargement of the pancreas with a characteristic peripheral rim(Fig 11). Retroperitoneal fibrosis presents as an enhancing soft tissue rim surrounding the aorta (Fig 12),which mayextend to a varying degree around its branches and into the surrounding retroperitoneum and may therefore be difficult to distinguish from aortitis.

In conclusion, IgG4-related disease is a recently established, distinct systemic disease that can involve multiple organs and organ systems. This disease responds well to corticosteroid therapy and patients have a good prognosis. Diagnostic imaging helps identify sites of involvement and distribution of the disease. It also helps monitor response to therapy.

Exercise May Improve Thinking Skills in People as Young as 20