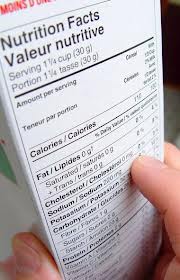 A Cornell researcher says in the current issue of the journal Health Communication that consumers are more likely to perceive a candy bar as more healthful when it has a green calorie label compared with when it had a red one – even though the number of calories are the same. And green labels increase perceived healthfulness of foods, especially among consumers who place high importance on healthy eating.

“More and more, calorie labels are popping up on the front of food packaging, including the wrappers of sugary snacks like candy bars. And currently, there’s little oversight of these labels,” said Jonathon Schuldt, assistant professor of communication and director of Cornell’s Social Cognition and Communication Lab. “Our research suggests that the color of calorie labels may have an effect on whether people perceive the food as healthy, over and above the actual nutritional information conveyed by the label, such as calorie content.”

Schuldt asked 93 university students to imagine that they were hungry and see a candy bar while waiting in a grocery checkout lane. The students were then shown an image of a candy bar with either a red or a green calorie label. Schuldt asked them whether the candy bar, compared to others, contains more or fewer calories and how healthy it is. The students perceived the green-labeled bar as more healthful than the red one, even though the calorie content was the same.

Schuldt repeated the experiment with 39 online participants who were shown candy with either green or white labels. The participants were asked to what extent the healthiness of food is an important factor in their decision about which foods to buy and eat, on a scale of 1 (not at all important) to 7 (very important).

The more importance the participants placed on healthy eating, the more they perceived the white-labeled candy bar as less healthful – a pattern that was eliminated when the candy bar had a green label.

“As government organizations including the U.S. Food and Drug Administration consider developing a uniform front-of-package labeling system for the U.S. marketplace, these findings suggest that the design and color of the labels may deserve as much attention as the nutritional information they convey,” Schuldt said.