Fenofibrate as effective in women as in man with Diabetes 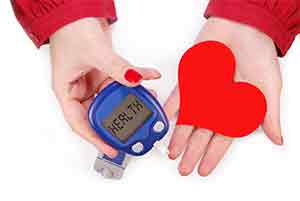 New research published in Diabetologia – the journal of the European Association for the Study of Diabetes shows that the blood-fat lowering drug fenofibrate is as effective in women with type 2 diabetes as in men with type 2 diabetes. The research is by the Fenofibrate Intervention and Event Lowering in Diabetes (FIELD) study investigators in Australia, New Zealand and Finland, led by Professor Anthony Keech from the Clinical Trials Centre at the University of Sydney, Australia, and Associate Professor Michael d’Emden, Endocrine Research Unit, Royal Brisbane Hospital, Brisbane, Australia.

Fenofibrate is a lipid drug, available since the mid-1970s, that is used to lower levels of the blood fats (triglycerides) and small dense LDL- or ‘bad’ cholesterol, and increase levels of HDL- or ‘good’ cholesterol. This unhealthy blood fat profile is particularly common in people with type 2 diabetes. The FIELD study, which was published in 2005, was also the first study to show that fenofibrate significantly reduced rates of diabetes complications such as eye and kidney damage and amputations.

Recent results from the ACCORD trial in the US had suggested that fenofibrate is not beneficial to some women. However, the FIELD group of investigators had planned, in the original design of the trial, to establish whether any differences in drug benefits or side-effects were evident between men and women. This new report provides the results of this pre-specified sex-specific analysis of the FIELD trial.

Previous studies with fenofibrate or, indeed, any fibrate have not reported a sex difference in responsiveness to therapy. However, most of the large prospective CVD intervention studies with fibrate monotherapy have either not included women or have had relatively small numbers of women, and even fewer have had women with diabetes. FIELD had a large number of women participating, allowing the study to generate important new evidence relevant to clinical practice. The low rates of side-effects of fenofibrate were similar in men and women.

The authors conclude: “Fenofibrate improved the lipoprotein profile more in women than men. Cardiovascular event reductions with fenofibrate were consistently similar in women and men, including among those with low HDL-cholesterol and high triglyceride levels. These data provide reassurance about fenofibrate efficacy in both women and men with type 2 diabetes. Both sexes with type 2 diabetes should be considered for fenofibrate therapy for cardioprotection… especially those with abnormal blood fats (dyslipidaemia).”

Many Older Individuals with Type 2 Diabetes Are Over-Treated