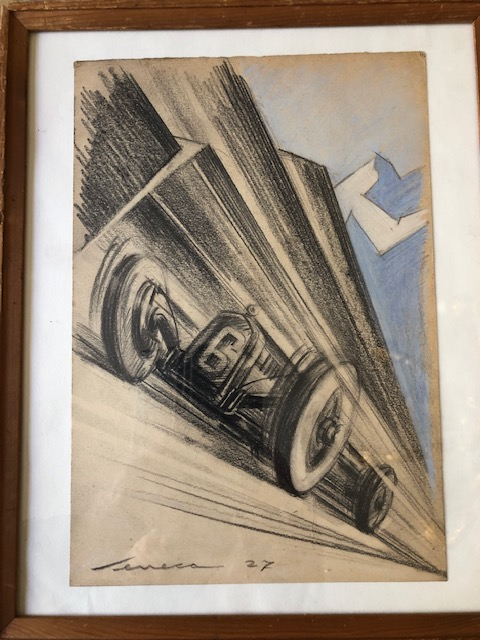 by Francesco Carelli May 3, 2022
Contributions, Contributors

An exhibition presents 300 works by Federico Seneca, as posters, leaflets, playbills, postcards, cover illustrations, preparatory sketches for signs, signs, books, magazines and much more.     The creative path goes from Liberty to art Deco to a futurist vision, to arrive, during post- war period forward,  to modernity with graphic synthesis of shapes accompanied by typographic suggestions, a play of chiaroscuro and bright colours,  In Perugia, for twelve years, he was in charge of the office – advertising of the newly formed company Perugina.  In this context, he created the logotype designed for the creation of the “Baci” Perugina and the graphic concept of the “scrolls” the typical cards that accompany the famous chocolate and of which he wrote some texts. The assignments for the firm Perugina soon overlapped with those of the Buitoni of which he became, starting from 1925,, director of the advertising – office and for which he studied the surprising and effective communication of gluten – free meals.  1928 marks the award to Seneca of the first prize to “International Poster Exhibition” in Munich, which will make him famous in the rest of Europe.

In 1933 he moved to Milan, at that time a true crossroad of international relations in the applied arts, graphics and architecture sectors, where he opened his own advertising studio.   Already before the war, his customer base was Talmone, Stipel, the first Italian telephone company, Rayon, Amaro Felsina Ramazzotti, Cinzano, Sala panettone, Salchi paints, Chlorodont, Lancover, and subsequently, wool BBB, Nailon, Pibigas.

In 1936, he participated with the major poster designers of the time ( Metlicovitz, Cambellotti, Cappiello, Dudovich, Nivola, Sironi and many others ) in the “First National Exhibition of billboards and advertising graphics “

But it was immediately after the war, in the Lombard capital,  that became the real engine of the nation’s recovery, where the most innovative companies in the country were born and developed, that Seneca played an increasingly leading role for the communication of new products. An example is the famous “wild cat” with which he won the competition held by Enrico Mattei to advertise Agipgas, the brand that advertised the liquid gas present in the Italian subsoil.

Risks Associated with Long-Term Use of Proton Pump Inhibitors