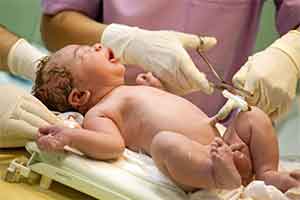 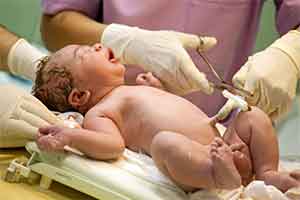 At birth, approximately one third of the child’s blood is in the placenta. If clamping of the umbilical cord is done immediately (early cord clamping), the blood will remain in the placenta and go to waste (or can be stored in stem cell banks). If instead clamping is postponed for three minutes, most of the blood can flow back to the child as an extra blood transfusion, consisting of about one decilitre (half a cup) of blood, which is equivalent to about two litres for an adult. A blood donor gives 0.4–0.5 litres of blood.
Blood contains red blood cells that contain haemoglobin. Haemoglobin carries oxygen to the tissues of the body. Haemoglobin contains a lot of iron, and the extra decilitre of blood may contain iron that corresponds to three to four months of an infant’s needs.
The World Health Organization (WHO) recommends umbilical cord clamping at one minute or later, while the American College of Obstetricians and Gynaecologists (ACOG) recommends umbilical cord clamping at 30–60 seconds or later.

In the study, the researchers randomised 540 children born at a large obstetrical hospital in Kathmandu, Nepal, to early (less than 60 seconds) or delayed (more than 180 seconds) cord clamping. In Nepal, approximately 70 per cent of infants up to one year of age have anaemia. Follow-up included blood samples at eight and twelve months of age, to evaluate anaemia (haemoglobin) and iron deficiency (ferritin).

Previously, we have demonstrated that after delayed clamping children in Sweden had more iron in the body at four months of age and that the proportion of children with iron deficiency decreased by 90 per cent, from 5.7 per cent to 0.6 per cent.

We have also shown that the children’s general intelligence and development did not differ at four years of age, but after delayed clamping the children had improved fine motor and social skills.

At the age of eight months, the incidence of anaemia was reduced by nine per cent among the Nepalese infants and even at twelve months of age, eight per cent fewer infants were anaemic. The children in the delayed cord clamping group generally had higher haemoglobin values, and the percentage of children who had iron deficiency at eight months of age decreased significantly, by more than 40 per cent.

Does the study have any limitations?

Major earthquakes occurred in Nepal in the midst of the trial, in May 2015. It was difficult to reach all the infants for blood sampling at eight and twelve months of age. At eight months, three quarters (74 per cent) and at twelve months just under two thirds (62 per cent) were assessed. We had anticipated these problems and had therefore 188 additional children included in the study from the beginning.

What are the research implications?

This study implies that waiting to clamp the umbilical cord for more than three minutes is important in communities where it is common for infants to have anaemia and iron deficiency. Delaying cord clamping for more than three minutes is an action with no cost from which we have not seen any side effects. We hope that those who write recommendations regarding umbilical cord clamping will take our results into consideration in the future.

There are more things in Obstetrics and Gynaecology, Horatio, than are dreamt of in your Philosophy – Part II

Medical Indemnity Insurance – what you need to know