Life is a series of choices. Every time you make a decision, there is a possibility that things won’t go as expected (risk) or that something bad will happen (loss). Aversion to risk and loss have powerful influences on how we make decisions. In a new paper in Biological Psychiatry, co-senior authors Dr. Jonathan Roiser and Dr. Oliver Robinson, both of the Institute of Cognitive Neuroscience, University College London, and colleagues studied the influence of risk and loss aversion in people with anxiety, a disorder characterized by debilitating avoidance behavior and difficulties making daily-life decisions. 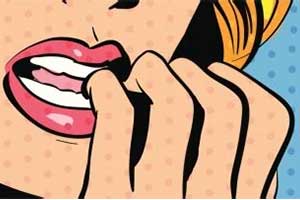 Anxious people might, for example, avoid driving over bridges because they are concerned that the bridge might collapse, explained first author Dr. Caroline Charpentier also of the Institute of Cognitive Neuroscience. “But is this because they overestimate the risk of this happening (i.e., a difference in risk aversion), or because the devastating consequences loom larger (i.e., a difference in loss aversion)?” The findings of the new study indicate that it may be more about risk than loss.
“This paper uses a sophisticated computational approach to shed light on why anxiety can be so disabling,” said Dr. John Krystal, Editor of Biological Psychiatry. “Nearly all life decisions involve risk. It appears that anxious people are hypersensitive to these risks, influencing their emotions, thoughts and behavior.”
In the study, 25 unmedicated patients diagnosed with generalized anxiety disorder and 23 healthy participants performed a gambling task to assess decision making. The design of the task addressed a significant omission of previous risky decision-making studies, the independent contributions of risk aversion (from uncertainty about the outcome) and loss aversion (from a disproportionate focus on potential losses). In the task, participants had to make decisions between a safe and risky option. Changing up the gamble — such as a sure gain versus a riskier higher gain or a potential gain versus a potential loss — allowed the researchers to separately assess risk and loss aversion.
Anxious people had similar levels of loss aversion to healthy people, but showed enhanced risk aversion. “In other words, everyone is loss averse, but anxious people are more reluctant to take risks than non-anxious people,” said Dr. Charpentier.
The findings refine the understanding of altered cognitive processing in anxiety disorder by disentangling the contributions of risk and loss aversion. Similar levels of loss aversion contrast previous assumptions that people with anxiety dwell excessively on potential negative outcomes, and instead suggest that aversion to taking risks drives avoidance behavior observed in anxious people.
The study takes an important step toward determining the best approach for cognitive behavioral therapy to reduce avoidance behavior in anxiety disorders. “It suggests that we should focus on encouraging anxious individuals to increase their tolerance of risk rather than dampening down their sensitivity to negative outcomes,” said Dr. Charpentier.

Eating mushrooms may reduce the risk of cognitive decline