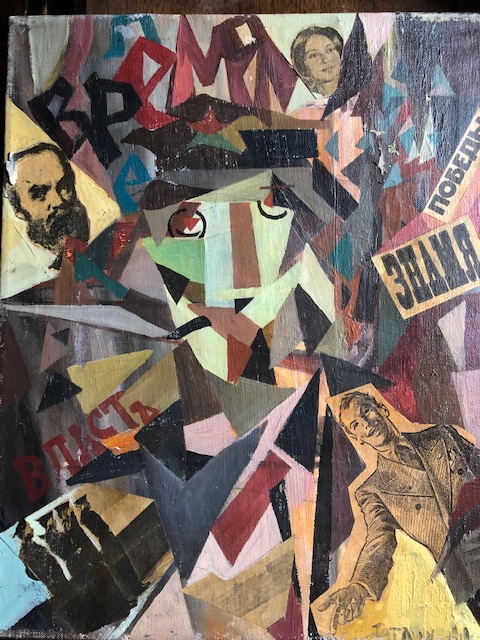 Vladimir Tatlin (28 December 1885 – 31 May 1953 ) was a Russian and Soviet painter, architect and stage-designer. Tatlin achieved fame as the architect who designed The Monument to the Third International, more commonly known as Tatlin’s Tower, which he began in 1919. With Kazimir Malevich he was one of the two most important figures in the Russian avant-garde art movement of the 1920s, and he later became an important artist in the Constructivist movement.

In 1905 he started and in 1910 successfully completed his studies at N.Selivestrov Penza Art School. During the summer vacations he traveled to Moscow and St.Petersburg to participate in various art events. In 1911 he resettled to Moscow to live by his uncle and began his art career as an icon painter. He also sang in Ukrainian and was a professional musician-bandurist, and performed as such abroad.

Much of Tatlin’s mature work shows a desire to abolish the traditionally representational function of art and put it to new, more practical uses. This accorded with his desire to put art in the service of the Russian Revolution, but also to express the dynamic experience of life in the 20th century. Although this would be more effectively achieved by a later generation of artists, some of whom put art aside to produce advertising and propaganda for the state, Tatlin’s work marks an important early stage in the transformation of Russian art, from modernist experiment to practical design.

Tatlin believed that the materials an artist used should be used in accordance with their capacities and in such a way that explored the uses to which they could be put. In part, this attitude is characteristic of the ethic of “truth to materials,” an idea that runs throughout the history of modern sculpture. But Tatlin’s approach was distinctively shaped by his desire to bring lessons learned in the artist’s studio to the service of the real world. That might explain why his work seems to shift from a preoccupation with the texture and character of materials, to a focus on technology and the machine.

Tatlin’s training as an icon painter may have been significant in suggesting to him how unusual materials might be introduced into painting, but the most important revelation in this respect was his encounter with Picasso’s Cubist collages, which he saw on a trip to Paris in 1913. Another echo of his earliest concerns – one that remains in his work throughout his career – is his preoccupation with curves, something that can be traced all the way from his early nudes through the experimental sculpture of his Counter-reliefs up to his architectural Monument to the Third International (1919-20).

He achieved fame as the architect who designed the huge Monument to the Third International, also known as Tatlin’s Tower.   Planned from 1919,the monument was to be a tall tower in iron, glass and steel which would have dwarfed the Eiffel Tower in Paris (the Monument to the Third International was a third taller at 400 meters high).    Inside the iron-and-steel structure of twin spirals, the design envisaged three building blocks, covered with glass windows, which would rotate at different speeds (the first one, a cube, once a year; the second one, a pyramid, once a month; the third one, a cylinder, once a day). For financial and practical reasons, however, the tower was never built.

Tatlin was also regarded as a progenitor of Soviet post-Revolutionary Constructivist art with his pre-Revolutionary counter-reliefs, three-dimensional constructions made of wood and metal,[11] some placed in corners ( corner counter-reliefs ) and others more conventionally.  Tatlin conceived these sculptures  in order to question the traditional ideas of art, though he did not regard himself as a Constructivist and objected to many of the movement’s ideas. Later worked with prominent constructivist artists as Varvara StepanovaAlexander Rodchenko László Moholy-Nagy, Antoine Pevsner.

Although colleagues at the beginning of their careers, Tatlin and Malevich quarrelled fiercely and publicly at the time of the 0.10 Exhibition in 1915 ( long before the birth of Constructivism), also called “the last futurist exhibition”, apparently over the ‘suprematist‘ works Malevich exhibited there. This led Malevich to develop his ideas further in the city of Vitebsk, where he found a school called UNOVIS (Champions of the new art).

Tatlin also dedicated himself to the study of clothes, and various objects, and flight, culminating in the construction of Letatlin personal flying apparatus.[13]

In the year of 1930 he taught in Kiev where one of his students was Joseph Karakis.[14]

From the 1930s Tatlin worked for different theatres in Moscow and during the Great Patriotic War, in Gorkiy. In 1948 he was heavily criticized for his allegedly anti-communist stance and lost his job, but was not repressed.   Tatlin died in 1953 in Moscow and was buried at the Novodevichy Cemetery.

The health crisis: to die for Maastricht ?