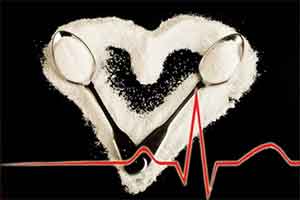 Scientists at the University of Leicester have demonstrated for the first time the mechanism by which the level of sugar in your blood can affect the contraction of blood vessels, with potentially dangerous effects on the heart and blood pressure.
Researchers led by Dr Richard Rainbow from the University’s Department of Cardiovascular Sciences have shown that blood vessels contract more strongly at raised glucose levels than at ‘normal physiological’ levels.
Blood vessels contract and relax to control blood pressure. In general, the more contracted the blood vessels are, the higher the blood pressure. Using electrophysiology and myography techniques to examine the impact of glucose on arterial myocytes, cells that make up the tissue of our blood vessels, the team has identified a mechanism that controls the narrowing of blood vessels.

The research comes as MPs and health experts debate proposals for a ‘sugar tax’ and highlights the potential health risks of consuming large amounts of rich, sugary foods regularly in your diet. With healthy eating among the most common New Year’s resolutions, it adds another incentive to reduce our intake of these foods all year round.
Heart attacks occur when a coronary artery, which provides the blood to the heart muscle to give the required nutrients and oxygen, are blocked. High glucose at the time of heart attack could make this block more severe by causing the blood vessel to contract, leading to a higher risk of complications.
Dr Richard Rainbow, Lecturer in Cardiovascular Cell Physiology, said: “We have shown that the amount of sugar, or glucose, in the blood changes the behaviour of blood vessels making them contract more than normal. This could result in higher blood pressure, or could reduce the amount of blood that flows through vital organs.
“This was an experimental lab study which means that we can draw conclusions about cause and effect in a controlled environment. Here, we have identified a known signalling protein family, protein kinase C, is a key part of this enhanced contractile response, and have also shown in our experiments that we can restore the normal level of contractile response, and reverse the effects on the heart, with inhibitors of these proteins.
“This is the first study to show direct evidence of blood vessel contraction to glucose, and the potential mechanism behind this contractile response. In the experimental models we used in this study, including human blood vessels, increasing glucose to the levels that could be reached after a large meal altered vascular contraction.
“A large number of people who suffer a heart attack will have high glucose due to the ‘stress response’. This means that even people who are not diabetic may become hyperglycaemic during a heart attack.”
The research team that worked on this study has a history of investigating the effects of glucose on the cardiovascular system, diabetes and heart function. Previous research in 20101 showed that high glucose from any cause, not just diabetes, was an indicator of a ‘worse outcome’ following a heart attack. Further research in 20142 by the Leicester group showed that glucose has potentially damaging effects on the normal function of the heart, such as arrhythmia and abolishing the built-in protective mechanisms that the heart can activate on stress.
Dr Rainbow added: “Our studies show that glucose has an important physiological effect on the normal functioning of the cardiovascular system. Increases in blood sugar to pathophysiological levels cause marked changes in normal blood vessel and cardiac muscle behaviour that could be life-threatening if left untreated.
“Our data show a clear glucose-induced potentiation of contraction in blood vessels. Targeting the specific types of protein kinase C that we’ve shown to be involved in this can provide a novel therapeutic route for improving outcome in ischaemic diseases, such as heart attack or stroke.”
Professor Jeremy Pearson, Associate Medical Director at the British Heart Foundation, said: “This team have shown that, in multiple species, it is possible to use PKC as a target to block blood vessel constriction caused by high levels of glucose in the blood. This opens up the possibility for improved treatment for patients where recovery from heart attack is complicated by raised glucose levels.”

Source: University of Leicester
Full bibliographic information:
The study ‘Distinct and complementary roles for a and ß isoenzymes of protein kinase C in mediating vasoconstrictor responses to acutely elevated glucose’ is published in the British Journal of Pharmacology

Failing to prepare is preparing to fail