Between one song and the next

A medical student is somebody who is usually taken up completely by university studies, medicine books and the like. But Maria Angela Grima, a fifth year medical student who is just 22 years old, has something else on her plate – singing

Meeting the petite young woman for a coffee, I get to know the story behind this love for singing. “I began singing at eight years of age, and that was as part of a children’s choir. One of my first appearances on stage was with the Cantores Sancti Juliani in St Julian’s, and one of the first performances was during the visit of Pope John Paul II. Obviously, for myself as a young child, this was a memorable and incisive experience, especially since there were over a hundred youngsters in the choir.”

Varied functions followed, both locally and abroad including in London and Naples. Her singing progressed in tandem with pianoforte studies, up until the point when she started having private singing tuition to develop her skills as a soloist. “My teacher Juliette Bisazza encouraged me to take part in various concerts and public functions, for which I am thankful since this exposure has built up my confidence towards an audience. As a classical soprano, I was eventually able to proceed in this field and have recently joined the Teatru Manoel Youth Opera, where I have taken part in two concerts held during these past months.”

Maria Angela says that her participation in the Teatru Manoel Youth Opera has allowed her to improve her theatrical skills and develop the ability to work in a team of fellow musical professionals, all with different qualities and roles to play.

She has performed in classical performances such as the concert based on Mozart’s ‘Le Nozze di Figaro’, in which she had the role of Susanna. This heralded new challenges regarding stage presence and communication with an audience.

“Being part of the TMYO thus gave me the opportunity to be a soloist in ‘Le Nozze di Figaro’, this being my first time having such an important role. The challenge was putting the audience into the story of the opera by communicating through my character of Susanna, acting as natural and as credible as possible. Another challenge was to learn the music score by heart in a very short time, since we prepared for the opera of ‘Nozze di Figaro’ in just ten weeks.”

Maria Angela’s passion for singing owes its origins to her family since her own father is a singer and her mother plays the piano and organ and teaches pianoforte studies. “I love singing and although I could have 22taken it up as a profession, I also had a second dream in my life since I was about seven years of age – and that was medicine which fuelled my aspiration to become a doctor – a beautiful profession and vocation. Obviously, combining both singing and medicine studies means I have had to learn time management, in a big way.”

During her first year in medicine, she had to cope with studies and two concerts which were hard to handle. During the following years she learnt how to focus better, especially during stressful moments like the run-up to an opera or the run-up to exams. “All those who have studied medicine know that you have to study long hours on a daily basis, even after taxing shifts at the hospital. Coping with lack of sleep and learning to take several power naps has helped me immensely and I get a boost from jogging whenever I am able to do so.”

Apart from having attended a medicine course at the University of Manchester in 2012 and taken part in a surgery exchange in Santiago di Compostela in Spain in 2013, she has attended several medical conferences abroad. Maria Angela has also written local articles, one on diabetes, another on dehydration, with her most recently published article about oral health having appeared on the Times of Malta last September. But what are her plans post-degree? “I will take up my two years of housemanship and hopefully proceed with further studies. I would love to specialise and do have a special interest in medicine and in surgery, but I think it is a bit too early for me to decide. In the meantime I will definitely continue my singing career, hopefully having more time to dedicate to that.” 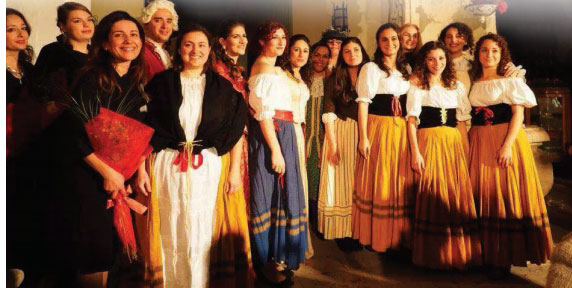 The Role of Vitamin D in a Healthy Pregnancy